A 100% subjective list of the best Russia Blogs out there. If you’re looking for something to read about Russia, this is the place to start.

There have been a few attempts to provide a statistical ranking of the top Russia blogs. But, for some reason, everyone except the blogger who tops the list complains that they aren’t accurate.

So, I thought I’d have a go at putting together a list of the Top 5 Russia blogs and, mindful of this problem, decided to base my list purely on my own subjective opinion. Not a statistic in sight.

Here, in no particular order, is my selection of the Top 5 Russia Blogs – the most influential, the most interesting and sometimes the most controversial Russia blogs out there. Feel free to disagree in the comments… 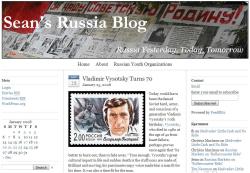 If you’re looking for serious, but readable commentary on Russia, Sean’s Russia Blog is the place to go.

The only academic in my Top 5 and (if you count La Russophobe as a group blog) the only solo blogger as well, Sean’s Russia Blog combines academic rigour with an accessible, easy to read style. Sean’s Russia Blog is also the longest running blog in my list, having been publishing on and off since October 2004 – that’s almost as long as Siberian Light.

Oh, and if you’e looking for information about Youth Politics in Russia (or punks, for that matter), Sean knows all there is to know… 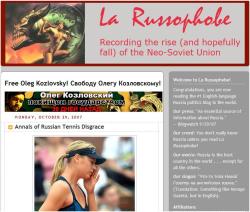 For almost two years now, the burning question on everyone’s lips has been… is La Russophobe a CIA agent pushing anti-Russian propaganda, or is she just a deranged lunatic with a grudge against Russian tennis players and way too much time on her hands?

Nobody knows, but everyone seems to have an opinion.

La Russophobe burst onto the scene almost two years ago and has been spewing out a frankly stunning quantity of anti-Russian rhetoric ever since. Nothing and no-one Russian escapes her biting criticism – Russia itself, Putin, Sharapova, and any blogger unfortunate enough to get in her way. Pretty much everyone associated with Russia and in the public eye (including me) has, at one time or another, been on the end of a La Russophobe spanking.

La Russophobe could not be a more combative blogger if she tried.

But, love her or hate her, La Russophobe has become easily one of the most influential, not to mention prolific, bloggers about Russia. Day in, day out (except Thanksgiving), the vitriolic anti-Russian posts keep flowing. Offensive they may be, but they often contain enough of a kernel of truth to force Russophiles to sit back and consider just how accurate their cherished beliefs are.

Russia Blog is perhaps the most pro-Kremlin of the blogs in this list, but it is also the blog that brings the widest range of voices to our attention, with commentary from experts and other bloggers, as well as its own in house editorial team of Yuri Mamchur and Charles Ganske.

One of two group blogs in my list backed by either a business or a policy organisation, Russia Blog often takes some flak for being run by an organisation associated with pro-Creationist views. But I can’t say I’ve ever really Russia Blog covering the creationist debate in Russia. A missed opportunity, perhaps? 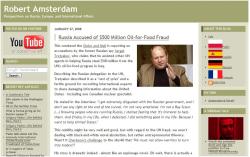 I’ll bet you never knew that Mikhail Khodorkovsky’s lawyer was a blogger? And a prolific one, at that.

As you’d expect from a law firm representing Vladimir Putin’s imprisoned oligarchic opponent, Robert Amsterdam and his team generally take an anti-Kremlin line. But, in contrast to La Russophobe, he also tends to give credit where it is due and the Russian government does something right. It’s just a shame that the opportunity doesn’t crop up all that often…

Russia’s a big country but, if something cool happens on the 1/6th of the world’s surface that is Russia, English Russia will be there to cover it.

Mostly filled with photographs and videos, English Russia showcases Russia in its glory, in its shame, and in its epic scale.

And, sometimes we just want to read the funny stuff. Not every blog about Russia has to cover politics…

Of course, in a list of just 5 blogs about Russia, I couldn’t cover every blog that I love reading, or give a comprehensive introduction to wide variety of Russia Blogs out there. So, if you’re looking for more reading, or if you just can’t stand the five blogs I’ve picked out, there’s a big list of Russia blogs on the sidebar. Take a look around…