Russian bloggers unite to stop a pharmaceutical scam, and make 21 million phone calls in the process. 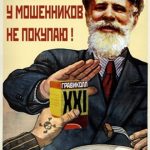 Over the past few weeks thousands of Russian bloggers have united to combat a pharmaceutical scam that tried to persuade Russian pensioners to spend around half of their annual pension on a course of Gravikol 21 – ‘anti-arthritis’ drugs that were actually little more than vitamin pills.

In the course of their campaign, Russia’s bloggers have not only publicised the scam nationwide, they’ve forced the notoriously unresponsive Russian government to act.

In perhaps the most startling expression of their offline power, Russia’s bloggers made 21 million (!) phone calls to the offending company’s switchboard, forcing it into meltdown.

The story has hardly been heard outside of Russia – try a Google News search for Gravikol, if you don’t believe me – but it will fundamentally alter perceptions of how Russian bloggers can influence Russian public life.

Early in October, blogger Brockhurst received a telephone call from his elderly mother, desperate for money to buy expensive anti-arthritis medication she had heard advertised on the radio. Incensed that his mother had been so desperate to buy these drugs that she had been in tears on the phone, he did a litle digging, and on October 12 rockhurst posted the news about Gravikol on his blog:

“These drugs cost R30,000 (approximately $1,500), but for today for one day only they are offering a discount for pensioners and this essential medicine for the elderly costs just R22,000 ($890). A courier will come for the money tonight… She said she had heard a radio program on which well-known cardiologists with unfamiliar surnames recommended that all elderly people use the medicine Gravikol 21 for joint pain. Take the course of 38 packets and your joints won’t trouble you for 10 years. Cardiologists. About joints — huh? Recommendations — bastards.”

In fact, Gravikol 21 (also known as Gravikoll 21 or just plain Gravicol) was little more than “gelatin mixed with ascorbic acid and fruit flavoring.” Arthritis sufferers would do themselves more good by just eating healthily and taking regular vitamins.

And the cardiologists recommending Gravikol 21? Well, lets just say that they weren’t famous until after the Graviskol storm broke…

The first reaction of Russian bloggers was one of (justified) fury, and 5,000 comments were left on Brockhurst’s blog – the maximum that is allowed on a single livejournal post. Within hours, outraged fellow bloggers were also writing about, and digging deeper into, the story. 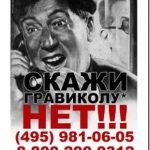 The bloggers fury soon turned into direct action when someone came up with the bright idea of publishing the telephone number of Farmit, the manufacturers of Gravikol 21, and suggested that everyone give them a call.

Soon Farmit’s number was posted on internet forums all over Russia for all to see. Sometimes associated with the Gravikol story, sometimes attached to ads for too good to be true real estate deals, sometimes with pictures of sexy and ‘available’ Russian girls attached…

Most of those who called in on purpose and not because they were misinformed could be generally split into three big camps: those who hanged up or went silent after getting connected, those who tried to appeal to the decency of the Farmit staff by either cursing them or trying to reasonable explain the problem, and those who placed orders for Gravikol 21?. This third group wrecked most havoc on the Farmit operations, possibly halting them at some point. By placing orders to non-existing locations or by canceling the orders after the couriers have arrived, the callers managed to distract Farmit from fulfilling the genuine orders. Even if its just one per cent of those who called in placed an order, this means that 210,000 orders had to be fulfilled within just 2-3 days, a task that sounds nearly impossible even for a big pharma company. Obviously, the ensuring effect on the moral of the couriers should not be underestimated.

Morozov reports one blogger’s estimate that Farmit’s received 21 million calls in the week after this story broke. That seems a little extreme to me, but the number of calls was clearly massive.

The tactic caused chaos at Farmit as they struggled to not only answer their phones, but to deal with the mountain of fake orders they received. In effect, as Morozov notes, the attack was an offline denial of service (DDOS) attack – and it sent Farmit’s switchboard into meltdown.

Calling in the big guns

However, this story gets more interesting when the Russian blogosphere moved beyond its initial kneejerk reaction, and turned its rage into calculated political action.

…in a popular post on 13 October well-known blogger Tatyana Tikhomirova (tanchik), a St Petersburg-based doctor, raised doubts about the real use of such actions. She wrote: “Sure, together we can block this (call) center without any problems, they will change the number and advertise the new one, but we won’t be able to block all the centers as interest in this issue will tail off… MY SUGGESTION IS NOT TO TRY TO DESTROY A SECOND CENTER OR ANY CENTER AT ALL. BUT TO TRY TO JOIN FORCES TO GET A SUBSTANTIVE RESULT….” She suggested that over the next 10 days bloggers collect together instances of advertisements that make unsubstantiated claims about the benefits of any dietary supplements, not just Gravikol 21. This material could then form the basis of an open letter of complaint to officials, which bloggers would sign via a special website and would circulate as widely as possible on the Internet and hopefully in the mainstream media. Banner for farma–fake LiveJournal community (community.livejournal.com/farma–fake, 13 October)

It probably helped that the story was quickly picked up by Evgeny Roizman, a Russian Duma deputy from Ekaterinburg who is also a fairly prominent livejournal blogger. Within a few days of Brockhurst’s original post, Roizman had written to the Prosecutor General’s Office, demanding that they either confirm that Farmit’s actions were legal or, otherwise, open an investigation.

The involvement of a Duma deputy, combined with the sheer number of bloggers writing about the Gravikol 21 story meant that even the Russian mainstream media couldn’t ignore the story for long. After a few brief internet and radio reports, the story hit the big time on 17 October, when State TV channel Rossiya dedicated four minutes to a report on their main evening news bulletin.

If you really want to get something done in Russia, you go right to the top. There is a long tradition of appealing to the leader (whether he be the Tsar, Party Secretary or President) for special help, so a campaign also quickly began to bring the story to the attention of President Putin.

Fortunately, Putinwas scheduled to host his annual televised Q&A session later that week, on the 18th October. The Q&A was set up to give Russian people the opportunity to phone in and in person ask Putin’s opinion on the burning issues of the day. This was too good an opportunity for Russia’s bloggers to miss, and a sustained campaign began to get a question about Gravikol-21 on the air.

Sadly, despite hundreds, if not thousands of calls, nobody ever got to ask Putin a question about Gravikol-21 on the air. But it seems fairly likely that the sheer volume of calls was noticed by his office. It wasn’t long before public officials began making statements on the affair:

The Graviskol 21 story isn’t over yet – nobody has been charged, and Farmit are still in business. But the word is out – big time.

It would take a courageous, not to mention stupid, government official to give Farmit the all clear now. If they did, Russia’s bloggers would just take up arms again and, this time, their target might be the government…

Update: Hat tip to Blue Bloggin, which has dug out this link to an English language product page for Gravicol (note the ‘c’ in the spelling).

In 1997, Purdue University published information with promising news that Graviola has a special affinity for helping to maintain the normal functions of DNA activities in cellular meatoblism. Gravicol tincture helps to maintain a healthy immune system

At least the company selling Gravicol in the US (Infogenesis) aren’t marketing it as an anti-arthritis drug.