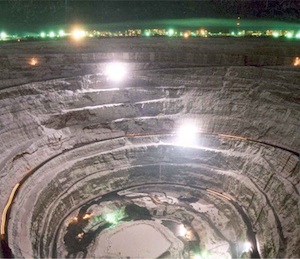 Mirny is often misclassified as the world’s deepest mine, but actually, it is the second deepest open mine in the world – it is 525 meters deep, and is 1,200 meters in diameter. It’s such a large hole in the ground that helicopters are not allowed to fly above it – the strange air pressure and turbulence causes them to crash.

The Mirny mine (sometimes also called the Mir Mine, or the Mirna Mine) was the first diamond mine founded by the Soviet Union. It was founded in 1957, after it was realised that diamonds were increasingly important for the Soviet military-industrial complex, but that the Soviet Union could not afford to continue buying them.

Despite being in a part of Russia so cold that oil would freeze, the Mirny mine was so successful that within three years it was producing more than 10 million carats of gold per year. So much, in fact, that the Soviet Union could afford to set aside the best, gem quality, diamonds for export. A secret deal was quickly done with De Beers, and the Soviet Union quickly became a major diamond exporter – so large, in fact, that Russian diamonds were the country’s most profitable export.

To support the mine, the town of Mirny was quickly developed, and now has a population of just under 40,000. If you look at the satellite map in this article, you will see that the town was built to come right up to the edge of the mine. The airport is also right next to the mine – presumably to get the diamonds to market all the quicker!

Today, production at the open cast mine has ceased – other mines are more profitable. But a significant amount of mining does still continue at the town’s traditional, underground tunnel mine. The tunnel mine, operated by Russian diamond mining company Alrosa, is thought to have enough diamonds still available to ensure its operation, and the jobs of the 3,600 miners, for almost 30 more years.

More pictures of the Mirny diamond mine can be found below. 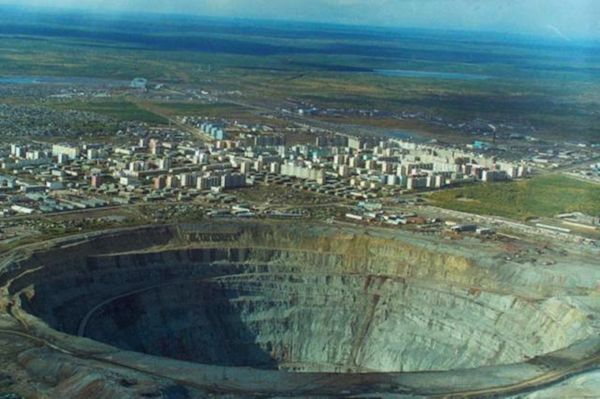 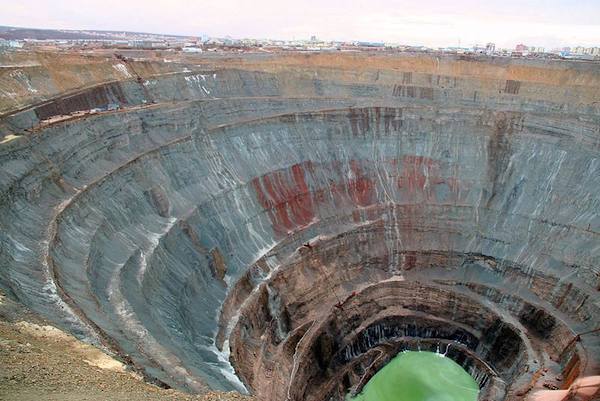 The Tunguska explosion in 1908 was shrouded in mystery and at the time, various theories were put forward as to what had happened. Now, over one hundred years later, scientists have narrowed down these theories to a...