How Russian women are running their own online businesses that make fashion affordable – and make a profit.

Anna Ershova is a Russian-Ukrainian rising sophomore at Yale University, where she plans to major in Ethics, Politics, and Economics. She also has her own blog.

Next time you clean out your closet, you�ll probably find some of the over-ripe, unwanted fruits of retail therapy: new but ill-fitting items, clothes that you thought would make you look like a movie star, but never had the Hollywood magic; somewhere in the corner there are those unwanted Christmas gifts that came without a receipt, hiding behind those barely worn jeans you don�t want anymore. To free up space and help those less fortunate, you may consider putting them in a Salvation Army or a Red Cross container. After a complex and long process, that is often semi-legal, there is a good chance your leftovers will find their way to a Russian women willing to buy them at a dirt-cheap price.

If you are an average single Russian female between 20 and 30, you most likely live outside big cities like Moscow and St. Petersburg. You probably have a bachelor�s degree and work a secretarial or a managerial job. Your salary is around 10,000 to 15,000 rubles a month: an equivalent of US $420 – $630. You pay around 6000 rubles for utilities, transportation and your cell phone/Internet, which leaves you with 4,000 to 9,000 rubles to spare. Given the ever-rising food prices, you need to spend a minimum of barely 150 rubles per day for groceries (no wonder young Russian women are known for being exceptionally thin), which sums up to 4,500 rubles per month. Forget about entertainment and vacations. This arithmetic barely leaves one with enough money to buy a warm jacket and a pair of boots to keep one warm in those cold Russian winters.

But what about other seasons? What about work and casual clothes? And all those accessories women adore buying so much? How do Russian women, especially the ones who do not rely on their husbands or fathers for their income, dress themselves? And how do they manage to do so fashionably?

A plethora of so-called �second-hand� shops has been thriving all over Russia. The concept came into being as the iron curtain came down and foreign goods began pouring into the country. A second-hand shop is usually a tiny room in a basement of an apartment building. The clothes are thrown into large piles in the middle of the room; some of the better ones are hung on the racks by the walls. 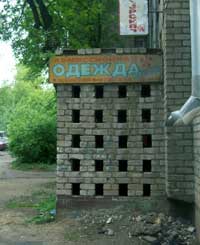 The used clothes and the ones by the cheaper brands such as �H&M� and �Zara� are usually sold by weight (the price is around 200 rubles � $8 � for a kilo). The better items (such as a brand-new �D&G� dress I saw while researching material for this article) are priced separately. They will rarely cost a lucky owner more than 300 rubles (appr. $13).

While exploring the stores in my hometown in Russia, I saw over a dozen of brand-new with tags �Miss Sixty� jeans, $2 each, and six brand-new jackets by �Zara�, $10 each. I couldn�t resist buying a pair of brand-new genuine leather �Gabor� shoes for $10 (original price � around $130). A lot of items look like they are from the over-stock in the Western stores. Most clothes, both used and new, come from the US, Germany, and Holland, according to the labels still attached to many items. All the brand-new gems are intermixed with used clothes: from slightly worn to threadbare. Every store has a m�lange of old cowboy boots and haute couture dresses. Second hand stores are a box of chocolates a la Forrest Gump: you never know what you�re gonna get.

Many younger Russian women enjoy spending their spare time at those stores, looking for unusual fashion finds. Many provincial Russian cities have a shortage of decent clothing stores, so even the affluent Russians are regulars at the second-hand stores: they are on a quest to find some high quality clothing they would only be otherwise able to find in Moscow.

Buyers for Second Hand Stores: A New Job on the Market 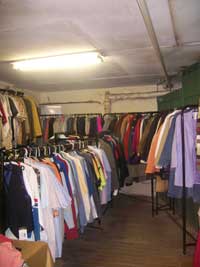 While many Russians enjoy hunting down that perfect jacket in these stores, many are repelled by the claustrophobic space, unorganized clothes, and the pre-owned items intermixed with the brand-new ones. But worry not: second-hand stores have their own buyer services, just like big department stores in the US and Europe.

Two young women from Kaliningrad, Youlia and Yuki, enjoyed looking for a diamond in the rough so much that they decided to help other women and men get unusual things at a low cost. At least once a week, the girls visit local second-hand stores, buy exciting clothing items, take their photos and post them on their lifejournal. Their online �friends� line up to buy things like menthol �Converse� keds, bronze patent leather clutch, and funky dresses by �Atmosphere.� Users can also create wishlists and the girls will seek out the coveted vintage dressed or fancy shoes for them.

Several other websites, modeled after �trendography,� have been springing up all over the Russian Internet. Most of them are run by women. In a country where only 20% of entrepreneurs are women, this trend is an immense achievement. It looks like the overstock items from the medium-priced Western brands help empower Russian women. Way to go, �H&M.�

So next time you think of donating your clothes to charity, it may be a charity of a completely unexpected kind: helping post-Soviet women start their businesses and look well-dressed. Quite an unusual charitable cause, isn’t it?