Blog > The strange case of the Patriarch, some sand, and 20 million rouble lawsuit
Blog 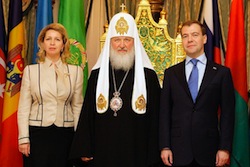 I’m absolutely baffled by the story coming out of this week of a 20 million rouble ($660,000) lawsuit involving Patriarch Kirill, the head of the Russian church, and Yury Shevchenko, a former Russian health minister.

The basic story is pretty straightforward, but so odd that there must be something going on below the surface that I just am not quite getting. If anyone could explain it to me, I’d be really grateful!

From what I can gather Shevchenko, who lives in an apartment on the floor below Patriarch Kirill, was having some kind of construction work done. As a result, some kind of undetermined substance (dust, sand, or harmful nanoparticles, depending on who you believe) was carried up and coated many of the surfaces in Patriarch Kirill’s apartment. Lidiya Leonova, who lives in the apartment, and is described in the media as it’s “keeper”, “discovered that all of the property, including the library, was covered in a thick layer of dust” and took it upon herself to sue Shevchenko for the damage caused to Patriarch Kirill’s apartment, including to some very valuable religious texts.

The case went to court and ultimately, after being barred from leaving the country by the court to treat his cancer abroad, the judgement went against Shevchenko and, again according to the media, he was forced to sell an apartment that he had bequeathed to his daughter in order to meet the bill.

Most of the reports in the English language media I’m reading seem to being fairly critical of Patriarch Kirill. The Moscow Times is laughing at the claims that the dust was harmful, pointing out that it was just sand and it would have been far more efficient to just hire a maid to vacuum it up. RFE/RL are taking a slightly different tack in also observing that the Partiarch has a very nice (and presumably very expensive) Swiss watch that, in order to substantiate his claim that he never wears it, has to be airbrushed out of official photos whenever the sleeves of his robe ride up and the world catches a glimpse of it.

Others, though, seem more supportive of the Patriarch. Pravda.ru says that any damages awarded will be donated to charity (which makes you wonder whether it is actually very expensive to clean up the damage) and that the Patriarch has reportedly pronounced that it would be “incorrect” to forgive Mr Shevchenko for his crime. RT points to a sustained anti-Church information campaign, of which this and the Pussy Riot demonstration are just examples.

I’m just so confused. Does anyone know what’s really going on here? If so, please could you explain it to me?