Coca-Cola has begun production of Kvas in Russia, proving that there is no soft-drink market they are not prepared to take on. 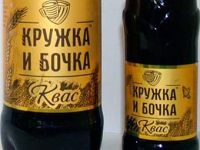 By announcing they are to make Kvas in Russia, Coca Cola have confirmed that there is no market they are not prepared to take on.

Coca-Cola, who have spent two years developing their own special Kvas recipie, began production of Kruzhka and Bochka (Mug and Barrell) at the beginning of this month. According to Coca-Cola’s President, Kruzhka and Bochk will depart from Coca-Cola’s traditional production methods, in that it will be “a natural product with no preservatives.” Proud of its naturalness and tradtion , they plan to market their new Kvass with the slogan “Kruzhka and Bochka – Real Kvass.”

Personally, I would have preferred “Koka-Kvas”, but that’s just me.

Anyway, before anyone’s even tasted Koka-Kvas Kruzhka and Bochka, it’s received a mixed reaction from Russians. Predictably, there are those who are protesting about the “Cola-nization” of Russia but there are also quite a few entrepreneurial Kvas manufacturers who are delighted that Coca-Cola have entered the market. Nikola Volkov, Marketing Director of Deka told the Guardian.

“If their kvas is sold alongside Coke it will improve its image among young people and raise the whole sector.” 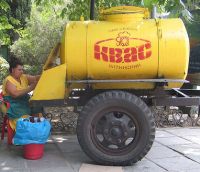 Kvas is the fastest non-alcoholic beverage market in Russia today – according to Canadean, a beverage research company, sales increased by 43 per cent to $461 million in 2007 – which makes it the market for Coca-Cola to get into. In fact, the market is growing so fast, that there are even rumours that Pepsi plans to enter, with it’s own Pepsi-Kvas.

But money is a secondary matter for the purists who read Siberian Light.

The real question is – will Coca-Kvas ever taste as good as the Kvas you get from yellow tankers in the street?