Out with the old…

Markov replaces Yury Baluyevsky as chief of the General Staff of the Russian Armed Forces. Baluyevsky was pretty widely known to have had serious disagreements with Defence Minister Anatoly Serdyukov over attempts to reform the military, to cut corruption, and to sell off the military’s real estate assets. According to Pavel Felgenhauer, Baluyevsky:

“was in an open fight with the defense minister to, a fight to resist his reforms, and he was kicked out.”

Not a good formula for keeping one’s job.

Baluyevsky has a fair amount of support within the military though, so it’s no suprise that he was pushed to a desk job upstairs – Baluyevsky is now deputy secretary of Russia’s Security Council, which is technically a promotion.

…And in with the new 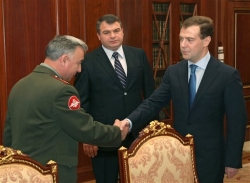 Nikolai Makarov has all the right credentials to be head of Europe’s largest military – he’s a career military officer who has risen through the ranks, he’s a reformer, and perhaps most importantly, he’s thought to be slavishly loyal to his new boss, the Defence Minister.

Makarov’s relentless rise of promotion after promotion will not only have given him an excellent overview of how the Russian military works from top to bottom, but can only help when it comes to gaining the respect of his colleagues. According to military analyst Ilya Kramnik, Russia’s new top officer is:

“viewed by many who have worked with him as one of Russia’s best generals. He rose through the ranks from platoon commander to head of a military district. His record includes service in Tajikistan and the special Kaliningrad region, where he was deputy Baltic Fleet commander for ground and coastal troops.”

And, when your Defence Minister is a civilian former tax collector who is almost univesally disliked by the military he is supposed to oversee, a competent and respected chief of staff is essential.

Makarov’s reformist tendencies are also thought to be impeccable – which is vital for the future of Russia’s military. Let’s face it, although Russia has been toying with the idea of military reform for a decade or more, it really hasn’t gotten very far yet – it’s high time a genuinely reform minded General was installed in the top job.

Makarov bucks conventional Russian military thinking by putting great emphasis on training and educating troops in his commands. This was an issue that the old Soviet army and the Russian army traditionally have ignored, except for very small elite units.

Makarov also believes in having flexible armed forces that, like the 21st century U.S. armed forces, are designed to work flexibly and be interoperable with units and elements from other arms of the Russian military in specialized task forces quickly assembled to perform designated missions.

Makarov’s emphasis on flexible, well trained, armed forces are going to be vital if Russia wants to (a) achieve military success within the Former Soviet Union and (b) project its power further beyond the old Soviet borders.

I would imagine that NATO’s Generals are watching Makarov’s appointment with some very mixed feelings. On the one hand, they will relish the opportunity to work with a modernised Russian military. On the other, I’d imagine they’ll be quite nervous at having to factor a re-invigorated and well run Russian military machine into their plans. A Russian military that is able to properly project its power abroad and that can take an active part in peacekeeping missions could transform the face of humanitarian intervention – and not necessarily for the better, in their view.

And, finally, of course, it helps that Makarov is loyal to the current team in the Kremlin – Defense Minister Anatoly Serdyukov, President Dmitry Medvedev, and Prime Minister Vladimir Putin. The three of them have been planning Russian military reform for some time now, but been frustrated by their inability to move the implaccable old guard.