The four men vying to be Russia’s next President – Putin’s Poodle, the Neo-Communist, Mad Vlad, and the liberal Masonic Grandmaster who likes to blog.

The Putin era will end on Sunday, when Russia elects its next President.

Four men are vying for the top job – Putin’s Poodle, the Neo-Communist, Mad Vlad, and the liberal Masonic Grandmaster who likes to blog.

The unanswered question on everyone’s lips is – will President Medvedev be his own man, or just Putin’s Poodle?

So far, we’ve seen precious little independent spirit in Dmitry Medvedev. In fact, Vladimir Putin’s preferred candidate is the consumate civil servant – for the past decade, been quietly working in the background, supporting his political master’s career. He managed Putin’s 2000 election campaign and, in 2003 became the Kremlin’s Chief of Staff.

Only since 2005, when he was appointed First Deputy Prime Minister, has Medvedev had any kind of real public profile. He used it to good effect – seeing off the marginally more charismatic Sergei Ivanov in the race to become Putin’s unofficially nominated successor.

Of all the four Presidential candidates, Dmitry Medvedev probably has the most clearly defined policies – they consist essentially of doing the same as Vladimir Putin. So closely aligned, in fact, are the two men’s policies, that Medvedev has already invited Putin to become his first Prime Minister.

Perhaps Dmitry Medvedev’s one saving grace is that he is a hard rocker. It’s hard to imagine that a fan of Black Sabbath, Deep Purple and Led Zeppelin, could be a entirely slavish devotee of authority…

Prediction: Although Medvedev is polling at 75-80%, I’m going to stick my neck out and say he’ll finish up with around 60-65% of the popular vote. Scoring less than 50% would be an utter disaster for Medvedev but, barring an unexpected catastrophe, there’s no chance of his being forced into a run-off. 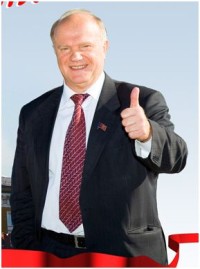 He might not look it from the picture, but Zyuganov is the battle scarred veteran of Russian politics.

In 1996, during some of Russia’s darkest days since the end of the Soviet Union, Zyuganov ran against Boris Yeltsin for the Presidency. Scoring 32% of the vote – just 3% less than Yeltsin – during the first round, he forced the election into a run-off. Zyuganov’s campaign focused on Yeltsin’s ill health, and the terrified incumbent President had to draw on all the advantages of state power to secure a narrow victory in the final round. In doing so, Yeltsin set the standard for all future ‘managed’ elections in Russia.

Zyuganov had another pop at the Presidency in 2000, scoring a reputable 29% of the vote and, although he had the good sense to avoid the 2004 race against an insanely popular Putin, he’s back for more this year.

Zyuganov’s chances of victory are all but nonexistent. The Communist Party’s core demographic is older voters, nostalgic for Soviet stability, and old Father Time is steadily killing off his support.

A number of disaffected younger Russians, who no longer remember the Communist era, are joining the Communist Party as an expression of their frustration, but probably not in large enough numbers to balance the losses among older supporters.

As you’d expect from a Communist – the core of his policy is based around renationalisation of private industry.

Polling at around 10%, Zyuganov will again be hoping for a second place finish. Anything above 25% would be a remarkable victory for him, and I’d imagine his campaign will try to establish him as the only reputable alternative for all disaffected Russians – especially now that Mikhail Kasyanov, the only recognisable Liberal candidate has been forced out of the race.

Prediction: Zyuganov will be thrilled that Kasyanov is out of the race. My money is on Zyuganov to exceed expectations, and pull in 20-25% of the popular vote, paving the way for one final tilt at the top job in 2012.

Mad Vlad, they call him. Because he is.

Off all the candidates, Zhirinovsky is the most colourful. He’s an extreme nationalist, but at the same time a very pragmatic politician, who knows how to appeal to his base. An anti-semite with a Jewish father, he regularly calls for the reformation of the Soviet Union – he was a vocal supporter of the 1991 coup against Mikhail Gorbachev – and gets into fist fights in the Russian Parliament. Most would roll their eyes, but a small minority of voters love him.

As a result, Zhirinovsky has been a force in Russian politics for almost two decades, ever since he founded the very first official opposition party in the Soviet Union, way back in 1990.

The LDPR has now morphed into a nationalist party, but one with just about enough support to give it a few seats in the Russian Duma – probably helped by Zhirinovsky’s inspired decision to ask Andrei Lugovoi, the man wanted in Britain for poisoning Alexander Litvinenko, to head up the party list.

Since the fall of the Soviet Union, Zhirinovsky has run for President three times (along with Zyuganov, he chickened out of running against Putin in 2004), and never received more than 8% of the vote. His last run was in 2000, where he scored a disappointing 2.7% of the national vote.

Prediction: This year, in a small field, Zhirinovsky will be aiming to ride on the coat-tails of the Kremlin’s newly assertive foreign policy and break the 10% barrier for the first time. I’m not convinced of his broader appeal, though and think undecided anti-establishment voters would prefer to go with Zyuganov or Bogdanov instead, leaving Zhirinovsky with a disappointing but respectable 5-8%. 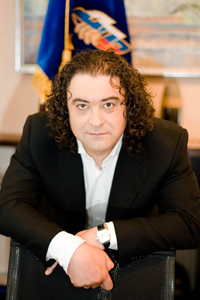 At 38, Andrei Bogdanov is the youngest, and most unexpected candidate in this election.

Bodganov heads up a liberal party that is both genuinely liberal, and genuinely unpopular in Russia. How the leader of a party that managed to secure 0.3% of the popular vote in a national election a few months ago managed to secure 2 million signatures to get onto the ballot for the Presidential Election is anyone’s guess.

That his 2 million signatures were approved by the Central Election Commission, while the 2 million signatures of former Prime Minister Mikhail Kasyanov were ruled invalid has led to criticisms that Bogdanov is only in the election so that the Kremlin can remove its only real liberal opponent and still point to the results and say: “Look, Russia is a democratic country – there is a Liberal party in our elections, and nobody voted for them!”

Campaigning on a platform of integration with the European Union and NATO, Bodganov has no chance of securing a sizeable vote.

But, looking on the bright side, as well as being genuinely liberal, Bogdanov has long hair, and he’s the Grand Master of the Russian Masonic Lodge.

Oh, and Bogdanov is one of Russia’s most prominent political bloggers. In between political commentary, he likes to post pictures of himself in his swimsuit.

Bogdanov will be aiming to pick up votes from other disenfranchised liberals, plus the odd protest vote. A result of around 5% would be good, anything above that could potentially position himself and his party as one of the most influential Liberal parties in Russia ahead of the next round of Duma elections in a few years.

Prediction: Despite his weaknesses, Bogdanov is the only liberal candidate, and I think enough liberals will swallow their pride to push Bogdanov just past the 5% mark.