Former Nuclear Power Minister Yevgeny Adamov was today sentenced to five and a half years in jail. He was wanted in both Russia and the US on charges of embezzlement. 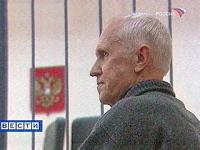 Former Nuclear Power Minister Yevgeny Adamov was today sentenced to five and a half years in jail by a Moscow court.

Adamov, who was convicted of stealing $30 million from a joint US-Russian uranium venture company, is also wanted in the United States on charges of stealing $9 million in US aid money that had been earmarked for improvements in Russian nuclear security. Unless the Russian constitution is changed to allow extradition, it looks unlikely, though, that Adamov will ever be tried in the US.

The Prosecution were disappointed by the sentence – they had called for nine years – and noted after the trial that Adamov’s theft had done significant damage to the Russian economy:

“Due to his activities, through stealing financial securities and abusing his powers, the damage to Russia directly and through missed opportunities, comes to almost $1bn.”

Sounds like hyperbole to me, although I’m sure the missed opportunity costs were greater than the $30 million Adamov actually stole.

Adamov has protested his innocence throughout the trial, insisiting defiantly that “I never took a kopek.” He has vowed to fight on to clear his name but, given that the US also want him on charges of theft on a grand scale, I doubt he will garner the same sympathy as other jailed Russian businessmen.

Incidentally, Adamov becomes the second former Russian minister to be jailed within the past few weeks – the Moscow Times yesterday reported that:

A Novosibirsk court last week found former Press Minister Boris Mironov guilty of inciting ethnic hatred but released him because the statute of limitations had expired.

Is this a new dawn in Russia’s fight against corruption, or just a continued settling of old scores?