Putin gave his final annual press conference yesterday. As usual, he threw out plenty of media-friendly soundbites – here are his best quotes. 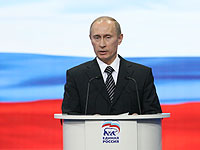 According to Kommersant, at more than four hours, it was his longest ever and, as usual, Vladimir Vladimirovich has thrown out plenty of media-worthy quotes to excite press interest. Some crude, some scary, some twee.

To give you a flavour of the event, I’ve compiled some of my favourite quotes from the press conference and grouped them together around a few key themes.

It seems as though Putin wasn’t impressed with Hillary Clinton’s recent quip about his not having a soul. When asked what he thought of Clinton he quickly snapped back:

“A state official must at least have brains.”

Current President George W Bush, on the other hand, is clearly Putin’s soulmate:

“Sometimes you have to make decisions that nobody else can make… Do you think Bush has it easy?”

In his own job, Putin confessed that he works “like a galley slave”, but didn’t ask for any sympathy:

“Heads of state have no right to whinge, or drool for any reason… If they are going to slobber and blow snot and say things are bad, bad, then that’s how it will be.”

I don’t know about you, but to me those sound like the words of a man with a cold.

On being the richest man in the world

For a while now an unsubstantiated story has been floating around about Putin’s $40 billion wealth – his alleged ill-gotten gains from 8 years in the Kremlin. Putin clearly isn’t impressed by the man who has been spreading the rumours, bringing out the snot reference yet again:

“They picked it [the story] out of their noses and smeared it on paper.”

But in one sense, he really is the world’s richest man:

“That is true. I am the richest man in Europe and the whole world. I collect emotions. I am rich because the people of Russia have twice entrusted me with the top position in such a great country as Russia. I think this is my greatest wealth.”

Of course, the main question on everyone’s lips was “So, what are you going to do after the election, Vladimir Vladimirovich, when you have to move out of your shiny Kremlin office?”

For a change, Putin was willing to talk. Here’s a collection of his comments – I’ll leave it for you to judge what he meant:

“I know how the head of state’s job is set up, and assure you that our relations will be quite harmonious. I will never step in for the head of the government. I consider that damaging and counter-productive.”

“The premiership is not a transitional post,” he said. “If I can see that in this capacity I can fulfill these goals, I will work as long as possible. There is no other answer.”

“I was never tempted to stay for a third term. Never,” he said. “From my first day of work as president I decided for myself that I would never violate the existing constitution. […]

“The president is the guarantor of the constitution. He sets the main directions for internal and external policies. But the highest executive power in the country is the Russian government, headed by the prime minister”

As you’d expect, Putin was blunt, possibly even confrontational when stating his views on foreign policy. He certainly pulled very few punches. On US plans for a missile shield based in Poland and the Czech Republic he threw out a nuclear threat:

Our experts believe that the system threatens our national security. If it appears, we will have to react adequately. We will probably have to retarget our missiles against those objects which threaten our security.

In a move that will please many, Putin drew parallels between independence for Kosovo and other struggles for national liberation around the world. Surprisingly, though, he shied away from traditional examples, such as Trans-Dniester, and instead cited Cyprus:

“I don’t want say anything that would offend anyone, but for 40 years northern Cyprus has practically had independence,” Putin said. “Why aren’t you recognizing that? Are you not ashamed in Europe of the double standards you are applying to settle problems?”

“I will yet again emphasize that we consider that unilateral support for independence for Kosovo is immoral and illegal.”

The greatest disdain, however, was reserved for those who want to monitor Russia’s Presidential election for compliance with ‘democratic’ standards.

“Let them teach their wives to make cabbage soup”

Indeed. At this rate, I’m going to need to update my Putin quotes to live your life by article.

Update: A full transcript of the press conference can be found at kremlin.ru. Thanks to Ger for the link.