Russia announces it is to resume military parades in Red Square for the first time since the Cold War and launches a major naval exercise just off the French coast.

It’s been a busy week for watchers of Russia’s military. Not only has Russia announced the return of military parades to Red Square for the first time since the fall of the Soviet Union, they also launched the largest naval exercise since the end of the Cold War – and off the French coast, no less.

First a run down of the week’s storys, followed by some thoughts on whether Russia is back with a bang, or just sabre-rattling. 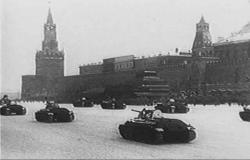 After the Soviet Union collapsed, the famous military parades through Red Square stopped. There was no fanfare. I guess someone just thought the parades no longer seemed appropriate.

The Russian Defence Ministry have announced that this year’s May Day parade in front of the Kremlin will feature 6,000 marching soldiers, tanks, Topol ICBM missiles and a flypast by 32 Su-27 and MiG-29 fighter planes.

Interestingly, this year’s May Day parade will also be the last parade that Putin watches as Russia’s President. 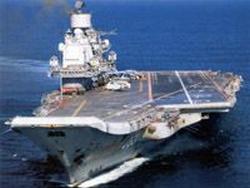 Also this week comes news of Russia’s largest naval exercise since the end of the Cold War.

A carrier strike group of 11 ships, led by the carrier Admiral Kuznetzov and backed by 47 planes has been firing missiles into the Bay of Biscay.

And, in a development that has not been well received in the (admittedly paranoid) British Press, a pair of Tu-95 strategic bombers flew from Russia, skirting British airspace, to join the strike group and test fire a couple of extra missiles. The planes were shadowed all the way by Norwegian and British interceptors.

Is Russia flexing its military muscle, or just sabre rattling?

Although Russia’s military is undoubtedly stronger than it was, and Russia’s relative power has increased, I still think this is mainly a case of sabre rattling.

Military parades across Red Square are more likely to show the Russian military as a cold war relic than a modern, well trained and well armed professional military. The symbolism is all ‘New Cold War’, and the show is primarily for public consumption in a country that would like to see some evidence of Russia’s much vaunted improved international strength.

The exercise in the Bay of Biscay, on the other hand is at least a concrete demonstration of Russia’s power and reach. There aren’t many countries in the world that could hold a major naval operation just off the French coast. Seen any Chinese naval task forces in the area recently?

But, for all that, NATO will be distinctly unimpressed by the show. The Russians have committed the bulk of their fleet to what is really just a piece of theatre.

Of 300-odd ships in the Russian Navy, only 30 are estimated to be sea-worthy. In effect, Russia was required to commit more than a third of its active navy to this demonstration.

And its far from clear that all the ships are fully seaworthy. As Pavel Felgenhauer, a respected Russian defence analyst notes:

“The Admiral Kuznetsov is due to go in for repairs when it returns home. There are two tugs with it now because everybody understands that it could go bust at any moment.”

There is no way the Russians would commit the Kuznetzov to an actual mission, unless it were a dire emergency. There is no scope for Russia projecting its power in any of the worlds trouble spots for the time being, and certainly no prospect of them supporting the UN in a peace-keeping mission.