A criminal investigation has been launched into claims of electoral fraud by leading liberal candidate Mikhail Kasyanov. 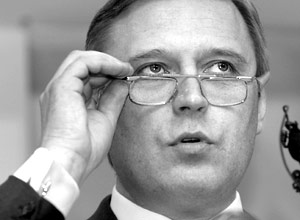 Mikhail Kasyanov’s bid for the Russian Presidency appears to have been derailed, following allegations that up to 16% of the 2 million signatures he had collected in support of his nomination are fake.

The allegations, if proved will bring Kasyanov’s candidacy to an abrupt halt. Even if not proved, they will significantly damage his public image – not that he had a particularly positive image to damage in the first place.

Here’s the official view from the Central Election Commission:

Under Russian law, of course, no more than 5% of signatures can be invalid.

Intriguingly, just four hours later it was announced that Andrei Bogdanov, leader of the Democratic Party, had passed the 2 million votes threshold – a mere 3.12 of his supporting signatures were ruled invalid. As it stands, it appears as though he will be the only liberal in a four-strong field of candidates.

Kasyanov, of course, is accusing the Russian authorities of harrassment, and of using dirty tricks in an attempt to derail his campaign. And, to an outside observer, that is, of course, the first thought that springs to mind.

However, although Kasyanov is a former Prime Minister of Russia, he isn’t particularly popular in Russia, and getting 2 million signatures was always going to prove a challenge – let alone 2 million legitimate signatures.

A part of me does wonder just how he managed to get those 2 million signatures, and its feelings like that the Central Election Committee’s will be playing on in making their claims of fraud.

The leader of a party who, in December’s national election polled a massive 0.13% of the national vote???

Give me a break.