A 5ft tall bronze monument to the enema. It’s held up by cherubs and surrounded by pretty nurses. What else can I say?

My girlfriend and I are off for a spa-break this weekend, so what better time to post this news about the unveiling of the world’s first monument to… enemas. 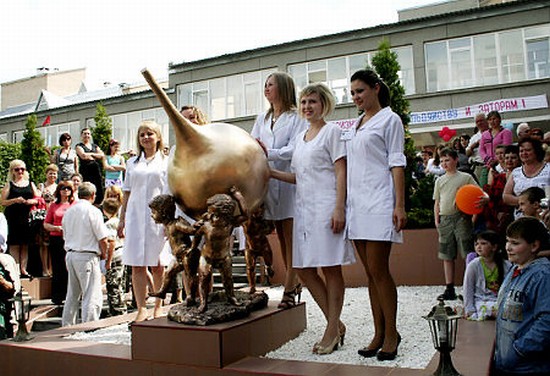 The 5ft tall bronze sculpture, held up by three cherubs and surrounded by suitably attractive and non-threatening Russian nurses, was uveiled yesterday in the Southern Russian city of Zheleznovodsk.

Why cherubs? Well, apparently the artist was inspired by Botticelli:

“The irony is that the little infants steal the weapons of Mars. They joke with him, with the god of war, and war is a tragedy.”

“Likewise, an enema is an unpleasant procedure as many of us may know. But when cherubs do it, it’s all right.”

The monument is accompanied by a delightful plaque, posted on a nearby wall – “Let’s beat constipation and sloppiness with enemas.”

All of a sudden, I’m feeling rather nervous about my upcoming spa-break…