This weekend Russian Tu-95 Bear bombers violated Japanese airspace and then, in their most audacious flight for a fair few years, went on to ‘buzz’ the US Aircraft Carrier USS Nimitz. Not just once – twice.

The Russian Air Force is very keen to tell the world it’s back. This weekend alone, Russian Tu-95 Bear bombers first violated Japanese airspace and then, in their most audacious flight for a fair few years, went on to ‘buzz’ the US Aircraft Carrier USS Nimitz.

Violation of Japanese Airspace
On Saturday, a Russian Tu-95 bomber overflew the Pacific island of Sofugan, 650km (400 miles) south of Tokyo for three minutes. The Japanese air force took the incursion so seriously that they scrambled 22 fighter jets to escort the Russian bomber out of Japanese airspace.

The furious Japanese government have demanded an explanation from Moscow, but a Russian Air Force spokesman was adamant that they have done nothing wrong:

All flights of the Russian Air Force were carried out in accordance with international air space regulations without breaching the other states’ borders.

Many in Japan are suspicious that the overflight was linked to an annual rally to demand the return of the Kurile Islands to Japan – they were seized by Soviet troops at the end of the Second World War and never returned. Despite recent concilliatory moves, both Japan and Russia still dispute the status of the islands, and have as a result, never signed a formal treaty ending their Second World War conflict. 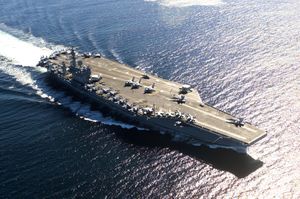 The story which has really hit the headlines, though, was the Tu-95 that buzzed the USS Nimitz – flying directly over the nuclear powered aircraft carrier at a height of just 600 metres not just once, but twice.

Four US F/A 18 fighter jets were scrambled and escorted the Russian Bear until it was comfortably out of range, but US officials are playing down the incident.

“It was a very benign flight that came through, and we just latched on to them and followed them in. I know I’m not playing this up very much, but that’s the way I see it. They came out to look. We joined up (and) flew with them until they went home.”

The Russian bomber was one of a squadron of four that approached the US carrier, but the only one to actually fly directly overhead. Because it was in international waters, though, the US could not legally prevent the Russian plane from flying overhead.

Reports of provocative Russian military activity are becoming increasingly frequent, right across the globe. Russia’s military is better funded than it has been for more than a decade, and the Kremlin feels that it is time to demonstrate that Russia is not quite the military basket case it once was.

But, all the same, there isn’t much to worry about here. Flights like these make good copy for the papers, but otherwise they don’t really surprise anyone in the world’s militaries.

The last Russian overflight of a US carrier was only four years ago, and the last Russian incursion into Japanese airspace was just two years ago. Incidents like these really are relatively common.

And I’m certain that, if the Russian’s sole remaining aircraft carrier ventured out of port more often, US planes would make their own overflights from time to time…

I think Russian paper Kommersant have probably got it about right when they point out that the Japanese and American militaries should actually be thanking the Russians:

A total of 22 fighters of various type, two early-warning planes and E-3A guidance AWACS were involved, so the Japanese could thank their Russian colleagues for the drill.

They should also be thanking the Russians for giving them yet another up close view of the Russian bomber’s flight capabilities – I’m sure both the Japanese and Americans will have collected bucketloads of valuable data, which someone, somewhere will be merrily analysing.