Liveblogging the election in which Russians will choose their third President. 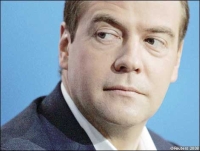 Russians are at the polls today, voting for the man who will become their third President, after Boris Yeltsin and Vladimir Putin.

Of the four candidates to be President of Russia, Dmitry Medvedev is the clear favourite – polls indicate he will pull in between 60 and 70 percent of the popular vote, with his nearest rivals struggling to reach 15-20%.

Throughout the day, I’ll be updating this post with the latest news from the election, as it happens. Although the result isn’t in doubt, there is still plenty to be interested in this year. Just how big will Medvedev’s margin be? Will observers find any real incidents of fraud? Will Chechens top their 99% vote for Putin four years ago with a 100% vote for Medvedev?

Please note that many of the links are to Russian language news sources. Where possible, I’ve linked to a translation, as well as the Russian language article. Additonally, some of the pages seem to be being updated on the fly, so the content may change after I link to it…

The results haven’t quite been announced, but with 99% of the vote counted, Medvedev has snuck past the 70% mark (translation here). The candidates now stand as follows:

70% is an important psychological figure, which will on the face of things give much more credibility to backers of Medvedev. On the other hand, the late increase in Medvedev’s vote share, from 64% late yesterday to just over 70% at the close of play, might arouse suspicions among the more conspiracy minded observers of Russian politics…

Before I go, just a few more quick notes.

Vladimir Zhirinovksy has announced that the LDPR will support Vladimir Putin if he is nominated as Prime Minister in May (translation here).

Paul-Marie Couto, a Member of the European Parliament was in Russia to observe the elections. He believes the elections were free and fair (translation here), and will no doubt become a poster child for the Russian Government. In an interview, he told reporters:

“When I get back to France, will convince our fellow citizens that they did not believe that read in the newspapers”.

Not all would agree with him. Other Russia have detailed a long list of voilations on their website and Communist leader Gennady Zyuganov has apparently got a list of 200 violations, which I assume he will release at some point in the near future – either to the press, or to a court.

Finally, the Garry Kasparov led Other Russia will be holding protest marches in Moscow and St Petersburg today. I doubt it will be a good tempered affair, so expect arrests. Indeed, Echo Moscow are reporting that arrests may have already begun (translation here) – Maxim Reznik, the St Petersburg boss of liberal party Yabloko is apparently in police custody.

All the polling stations are closed now, and the voting is done. All that remains is to count the votes.

Earlyy figures released by the CEC are pretty much following the polls at the moment. As of now, they’re reporting an easy win for Medvedev (translation here) – as we stand the candidates rank as follows:

No official turnout yet, but I saw an earlier report (sorry, lost the link) which put it at just under 64%, which I’d imagine will be a (very very) slight disappointment to the Kremlin.

In Chechnya, Medvedev gained a disappointing 90% of the vote (translation here). Disappointing because Putin gained 99% there just four years ago…

Four people have been arrested at a flashmob demonstration in Moscow (translation here). Garry Kasparov, leader of the Other Russia movement, was reportedly at the event, but no news yet as to whether he was one of those arrested.

Update: looks like Kasparov is on the loose for the time being – well, more or less. According to radio station Echo Moscow, he wasn’t one of those arrested at the flashmob. Kasparov was, however, prevented from entering Red Square (translation here).

Still a bit quiet as we await the first results.

In the meantime, you might be interested to know that 93% of Russian soldiers voted (translation here) in the Far Eastern Military District. Presumably because they were told to.

Additionally, more allegations of violations are coming from the Communist Party (translation here). They are reporting seeing ballot box stuffing, and a polling station where a poster was prominently displayed with a big tick next to one of the candidate’s names.

Vladimir Putin and Dmitry Medvedev are at a nice restaurant having lunch (translated article here), along with Federation Council head Sergei Mironov, Chairman of the State Duma Boris Gryzlov, and current Prime Minister Viktor Zubkov. On the menu, says Interfax, are omul, a fish native to Lake Baikal in Siberia. Mmmmm, tasty.

Surely it’s supposed to be bad luck to celebrate victory before the vote is even done?

Meanwhile, polling stations are beginning to close in the far East of Russia, so the first preliminary results can’t be too far away…

The big names in Russian politics are all turning out to vote. Putin and his wife voted just an hour or so ago (translation here). Putin, like Medvedev before him was in a particularly chipper mood:

“I’m in a celebratory mood. Luidmilla, when she left the house, said that rain means good will”.

Communist candidate Gennady Zyuganov has also voted. Unlike Putin and Medvedev, though, he’s not in a good mood, and seems to be the first person of note to be reporting electoral violations (translation here).

“We sent almost 500,000 observers to oversee polls. Unfortunately, there have been many violations.”

Nationalist LDPR leader Vladimir Zhirinovsky was also out bright and early. Perhaps recognising his limitations, he was pretty upbeat, too, restricting himself to a quick cheer of “For victory!”

No news yet of token liberal candidate Andrei Bogdanov.

As I wake up in London, voters are going to the polls throughout Russia. Because of the country’s vast size, some regions, like Vladivostok are about to close their polling stations, while voters in the west of the country have many hours still to vote.

So, at the moment, no actual results to report.

The Central Elections Commission are already reporting high turnout, however. An hour or so ago, turnout was running at 15%, which is 3-4% higher than the equivalent time four years ago (translation here). As the turnout last time was just over 64%, the Kremlin will clearly be hoping for a turnout of around 70% to give increased international legitimacy to the election.

Dmitry Medvedev is, of course, among those who voted. He came out of the polling booth with a spring in his step, telling reporters that a new era was dawning:

“Spring has arrived – although it is raining, a new season has come.”

Does anyone believe him?

Election observers are already reporting on the legitimacy of the election. Unfortunately, since the OSCE decided not to send observers (citing intolerable conditions being imposed on them), the only observers seem to be from the Commonwealth of Independent States. They have observers in around half of Russia’s regions and, unsurprisingly, they’re giving the election a clean bill of health (translation here).

Finally, for this update, a bit of light relief – apparently, as is tradition, members of the Central Election Commission will not wear ties to work today (translation here). They’ll don their ties again at 9pm, Moscow Time, when they start announcing the results.

Every Russian Bond Girl Ever