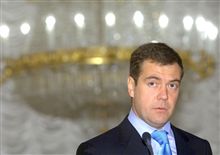 After literally years of speculation, it is now clear that Dmitry Medvedev will be Russia’s next President.

Medvedev was nominated by United Russia and endorsed by Vladimir Putin – an endorsement so powerful that now all he has to do to win the Presidential election next March is stay alive.

Medvedev has no real power base in the Kremlin beyond Putin – a native of St Peteresburg, he has no strong ties to any Russian siloviki group, and no KGB background to fall back on. Putin’s chief of staff, and the architect of his 2000 election victory, Medvedev is a phenomenally competent adminstrator – combined with his largely liberal and less hawkish views towards the West, he seems the ideal candidate to become a puppet President to Putin’s Prime Minister, allowing Putin to get on with the job of ruling Russia, while Medvedev charms the West.

I’m beginning to wonder (and I don’t think I’m alone), though, whether Medvedev could actually be the real deal – that is, a President who actually leads Russia, as Putin slips gently into an early semi-retirement.

Medvedev’s loyalty to Putin means that he is unlikely to turn on his former boss. And, rather like Putin back in 2000, Medvedev is the man nobody can conceive of as being President – no power base, stuck in the middle of warring clans. The perfect man to hold everything together…

And, as Chrisus Maximus notes over at Sean’s, pretty much everyone thought Yeltsin’s retirement was a sham at first:

But by all accounts, Putin may be leaving the Presidency, but there has never be any indication that he will leave Russian politics.

Isnt this what they said about Yeltsin?

Really, given the immense powers of the presidency, can the president be anyones puppet? They said VVP was BABs kukla.

But, really, the only thing I know for sure is that Kremlin watchers aren’t going out of business any time soon. Which, as a Kremlin watcher, cheers me immensely.