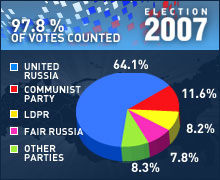 Much as everyone expected, Putin’s United Russia party won a massive victory in yesterdays’ Russian elections. As I write, 97.8 % of the votes have been counted, and 64.1% of these went to United Russia.

Other parties passing the seven percent threshold and guaranteeing themselves seats in the next Duma were the Communists (11.6%), Mad Vlad Zhirinovsky’s LDPR (8.2%) and Fair Russia (7.8%)

No real surprises, but a couple of quick points worth noting.

First, United Russia failed to reach the supermajority (66%) they would need to amend the constitution alone. True, Fair Russia and the LDPR are allies of United Russia, and almost certain to vote with Putin’s party and give him control of almost 90% of the Duma’s seats, but the near miss will surely rankle with the top brass in the Kremlin. Particlarly after so much effort was spent in ‘persuading’ people to vote for the right party.

(Update: It looks as though my maths was a little wonky and United Russia will actually have a super-majority. The red face here belongs to me, rather than anyone at UR).

Second, the pollsters who predicted that the next Duma would be made up of just two parties – United Russia and the Communists – were proved wrong. Instead, four parties will be represented in the Duma. Perhaps someone in the Kremlin really was worried that Putin would look too much like a dictator…