Kasparov pulls out of Presidential race 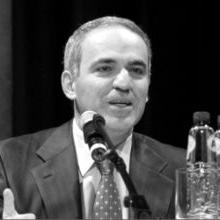 Garry Kasparov has announced that he will withdraw from the race for the Russian Presidency.

Kasparov, the former World Chess Champion, says he was forced into his decision because Other Russia were not able to find a venue to occupy 500 supporters in an initiative group meeting – a requirement of Russian electoral law.

Announcing his decision to withdraw from the race, Kasparov told reporters:

“In all Moscow we have not been able to find a hall where our supporters could meet. We pay and the people agree. There are no problems.

And then they call us to say they are refusing, can’t give us the hall anymore.”

Other Russia have had problems securing venues before, as hotels and conference centres would take their bookings then pull out at the last minute. The venues always seem to blame technical reasons, but it’s hard to credit that so many technical problems would affect every venue approached by Other Russia. Instead, venues clearly believe that hosting an Other Russia conference would not be good for their business in the long term. And who can blame them.

The real reason behind Kasparov’s decision to pull out of the race, I suspect, is that he had almost no chance of securing the 2 million signatures needed to endorse his candidacy – and failing in this effort would have been political suicide. Far better for Other Russia to hold their horses, continue sniping from the sidelines and, perhaps, have another stab at electoral politics in four years time. Perhaps by then, Putin’s power will be on the wane, and there will be a real opportunity for a non-establishment challenge.

Still, I’m a little disappointed that Kasparov used this as an excuse to withdraw. I would have expected a little creativity, to be honest. Perhaps Kasparov could have arranged a meeting of 500 activists during a demonstration. Sure, it may not have satisfied the electoral commission, but it would have made for some great tv footage, as Russian police broke up the meeting.

As it stands, Russia’s democratic hopes will once again be represented in a Presidential election by Gennady Zyuganov, a Communist…