A couple of weeks ago I went back to my home town to watch the annual Bridgwater Carnival.

For the uninitiated, the Carnival is a massive procession of illuminated floats, each carrying enough lightbulbs to be seen from space and blasting out music loud enough to wake the dead. Atop each float (known locally as a cart), you’ll also find a bunch of Somerset folk either frozen in a tableaux, or dancing their little hearts out.

(That description probably doesn’t quite do it justice – scroll down the post a bit to the highlights video towards the end of this post and you’ll see what I mean).

All great fun but, ordinarily, I wouldn’t ever mention it on a blog dedicated to Russia. Except that, this year, I was nearly knocked off my feet by three Soviet soldiers on horseback, leaping towards me through an arch of blazing white light. 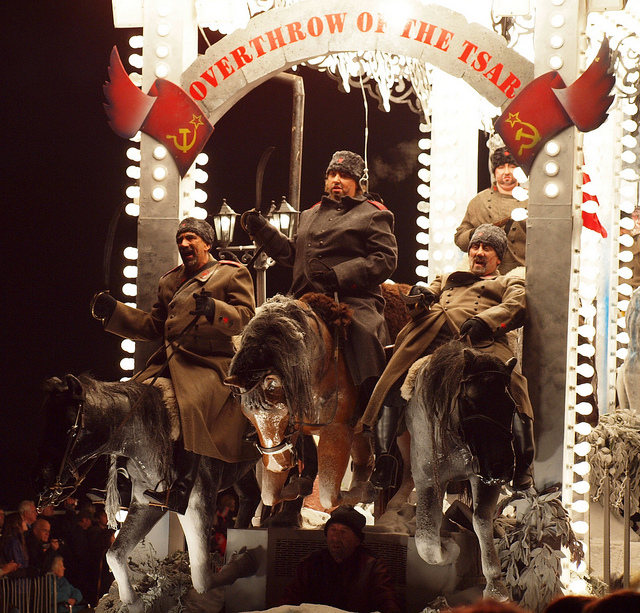 And you can see it all in this amazing video. (But, before you press play, do yourself a favour – make the video fullscreen, and put the sound on high).

If that wasn’t enough, here’s another video.

This amazing effort (did I mention that they stay in that frozen position for hours at a time?) by Pentathlon Carnival Club, was rewarded with a well deserved first place finish in the tableaux class.

It’s probably not entirely typical of a carnival float however – although there are a few tableaux, the majority of carnival floats are much more upbeat and cartoony, populated with insanely energetic dancers. A bit like these…

If you’re ever in the South West of England in early November, you really should check out the carnival. Let me know you’re coming, and I’ll tell you where the best vantage points are.