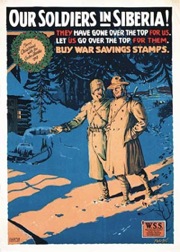 George C. Voegeli was a member of the 8,000 strong American Expeditionary Force (AEF) sent to Siberia during the Russian Civil War. Although not supposed to keep a diary, he managed by keeping it under cover. Then, once he got home, he consolidated his notes into a fuller journal of his time in Siberia.

In Siberia regularly posts Voegeli’s journal entries in blog form, and supplements his recollections with articles giving historical background to the events described in his journal.

Life for a member of the AEF seems to have been a mixture of travelling and boredom interspersed with the odd moment of fear and terror. Voegeli certainly did a lot of travelling, from America to Vladivostok, via Japan, then on towards Khabarovsk.

The one thing that shines through from all of the journal entries so far, though, is the utter confusion and complexity of the situation. In that period, Siberia was largely lawless, a vast tract of land in which small petty battles between warlords and desperate men were fought out. Without a clear mandate, the AEF spent much of its time stuck in the middle of two or more warring factions.

“I was just about half a sleep when I hear the firing of a few guns but it did not take long when all over the hill we saw flashes of guns. At first we thought that they were shooting at us, as some of the bullets were hitting the side of our car but all at once fire opened up on the other side of us and this came from the garrison. We were in a fine place as we were right in line and in between the two fires and believe me it got pretty hot for us. We could not leave our car for if we did it meant sure death for us. Our guns were in a car with the supplies.”

The latest addition to In Siberia is a regular podcast, in which excerpts from Voegeli’s journal are read out, followed by a discussion of the historical context. I must say, it’s a great idea and hearing the journal read out loud really brings Voegeli’s words to life.