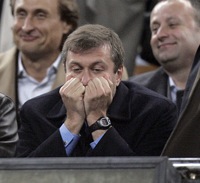 The Italian Press are reporting that Russian Oligarch Roman Abramovich lost one of his $500,000 yachts in a game of poker last week.

Apparently Abramovich has become quite a serious (although apparently not too good) poker player recently, and lost the yacht in a Spanish poker game last week, after watching his football team Chelsea play Barcelona in the European Champions League.

Unsurprisingly, nothing but strenuous denials from Abramovich’s spokesmen.

“The story is absolutely, completely, entirely false. We have instructed our lawyers to examine legal action.”

I’ve just done a quick Google search to find out a bit about Abramovich’s fleet of yachts. If you remember, he has such an extensive collection that the British Press have dubbed his fleet “Roman’s Navy”. Here’s a picture of just one of his yachts.

Given that Abramovich has four or five yachts at least as nice as this one, and that they each have to be worth $50 million or more, I’m not sure that the loss of a $500,000 yacht is going to bother him all that much…