There was more unrest and behind the scenes politicking in South Ossetia today, following the Supreme Court’s decision yesterday to annull the results of the election and ban Alla Dzhioyeva – the opposition candidate who looked to have secured victory – from participating in a re-run.

Dzhioyeva has refused to accept the Supreme Court’s decision, declared herself President and promptly begun to set up a state council. According to the BBC, 1,000 of her supporters (which is pretty impressive when you consider that South Ossetia only has a population of around 60,000) marched to the main square of Tskhinvali, the capital city, to back her claims of victory.

Journalist Alan Tskhurbayev attended the rally and provided live updates on the Kavkaz-Uzel site (the preceding link is in Russian – here’s a translation). He estimated the size of the crowd as 3,000, and reported police shooting into the air as the crowd surged forward to try to enter the Central Election Commission’s offices. 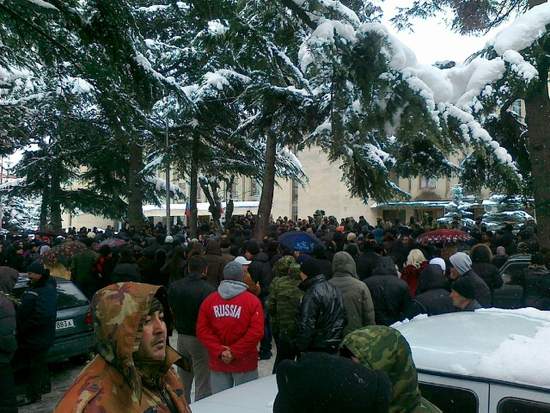 Towards the end of the day Dzhioyeva called on Eduard Kokoity, the country’s outgoing President, to overturn the Supreme Court’s ruling, although it seems unlikely he will do so – he earlier told reporters that “the republic’s leadership will make no concessions and will not yield to pressure. I call on everyone to come to their senses and make serious conclusions.”

Russia’s position at the moment is not at all clear. This afternoon the Russian Foreign Ministry released a statement recognising the annulment of South Ossetia’s election, but it has also said that “Russia regards these political processes as an internal matter of a friendly neighboring state.”

It remains to be seen what approach Russia will take in its choice between two candidates who are both, essentially, pro-Russian. But, with Dzhioyeva unwilling to back down, and her opponents looking very uncertain of their positions, it does seem as though there is potential for Russia to use its influence to back Dzhioyeva behind the scenes without losing too much face or influence.