France has begun work on building the first of two Mistral class warships for Russia. French naval defence company DCNS confirmed that it had received initial payments from the Russian Government of $1.2 billion, which enabled it to begin construction.

In a statement, DCNS said: “The advance payment was received several weeks ago and work on the first ship is getting underway. The first ship will be delivered in 2014 and the second in 2015.”

As a part of the deal, Russia will then construct two additional Mistrals itself, after which it not only have four ships – it will presumably also have additional technical knowledge that it can either use to build more similar ships, or which will benefit its own domestic naval shipbuilding programme.

The Mistral is variously referred to as an amphibious assault ship or a helicopter carrier. As well as being able to carry up to 35 light (attack) helicopters or 16 heavy (carrier) helicopters, it is also capable of transporting up to 900 troops or 59 vehicles, including 13 tanks. 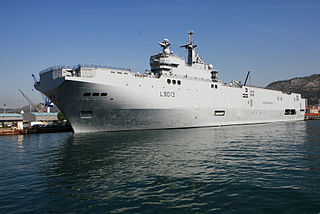 It’s purchase will go some way to filling a massive gap in the Russian Navy’s fleet which currently only has a single aircraft carrier – the Admiral Kuznetsov. An additional four Mistral ships will dramatically increase Russia’s ability to project force away from its own borders, particularly over the longer term if plans to introduce additional aircraft carriers by 2027 are realised.

For an excellent overview of Russia’s future plans for its navy, I recommend reading the Geopolitical and Conflict Report’s excellent Update on the Modernization of the Russian Navy.

You can find out more about the Mistral by checking out the RIA Novosti infographic below. Wikipedia also has a detailed overview of the Mistral.

Other news of the day

Although Russia remains committed to its own domestic arms industry to both equip its own armed forces and to export arms abroad, it is increasingly active as a buyer on the international arms market. As well as the Mistral deal, it has also recently signed a $100 million deal with German company Rheinmetall to construct a military training facility and a further deal with Italian company Iveco to supply a number of Lynx light military vehicles, despite the fact that they are four times as expensive as Russian produced vehicles.