Time for the second edition of our resurrected roundup of what’s been happening in Russia blogs over the past seven days.

To my mind, the most intriguing story of the week has been that of the chaos surrounding the annulment of South Ossetia’s Presidential election. And that’s where my top blog post of the week comes from (actually two blog posts). Journalist Alan Tskhurbayev, a supporter of Alla Dzhioyeva – the victorious candidate who has been stripped of her victory – has been live-blogging from the central square in Tskhinvali. His blog from the first day is here and his blog from the second day is here. I imagine that there will be more daily updates from Alan and other local bloggers as the situation develops, which you can find on Kavkaz Uzel’s main blog page.

(All the links above are in Russian, but you can easily translate them with Google Translate.)

Other blog posts that have caught my eye this week include:

That’s it for this week. I’ll leave you with a picture from Tsar Nicholas II’s very plush royal train, courtesy of English Russia. 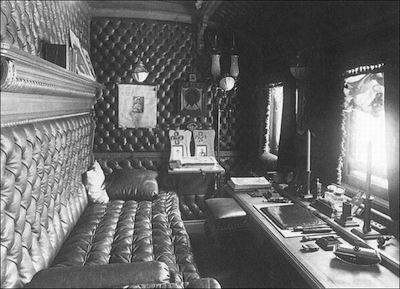 If only my office was so plush. And mobile.