Results (even preliminary results) are not expected until late this evening and tomorrow. United Russia, the party led by Vladimir Putin, has slipped slightly in the polls recently and is expected to lose the constitutional supermajority that it currently holds – it is, however, still expected to win a comfortable majority of Duma seats.

The Communist Party is expected to take second place with around 20% of the vote, which will increase their number of Duma Deputies considerably. The only other party guaranteed to secure 7% plus of the vote required to enter the Duma is Vladimir Zhirinovsky’s populist Liberal Democratic Party of Russia, although there is a fair chance that Fair Russia will also sneak over the threshold. The other three parties contesting the election – Yabloko, Right Cause and Patriots of Russia – are unlikely to prove popular enough to secure 7% of the vote.

For a balanced view of each of the parties contesting the Russian Duma election in 2011, we recommend this BBC News article. 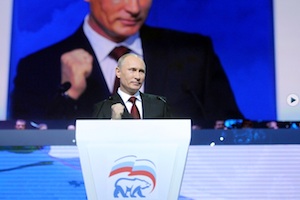 As I write (9:00AM GMT), the polls are just about to close in Vladivostok, where it is 8:00PM, but voting won’t be complete until the last polling station closes in Kaliningrad at 5:00PM GMT. Early turnout figures from the Russian Far East indicated that turnout is down slightly on the last election, but not by much, although the Central Election Commission is reporting that turnout overall might be slightly higher than in previous years.

There has been considerable debate about whether the election would be conducted in a free and fair manner. The Russian Government has confirmed that it will not hamper the activities of international election observers, and has confirmed that 650 observers, including some from the OSCE and the European Parliament, will be present today. So far, observers seem to be satisfied with the way that the poll is being conducted. Mateusz Piskorski, a Polish observer, told reporters:

“The group of observers linked to the network of non-governmental organizations, including deputies of European parliament, national parliaments, experts and political scientists, has visited 48 polling stations in several Russian regions and so far our colleagues have no critical remarks, and everyone says that the process is very transparent.”

However, the head of Golos (an independent election observer in Russia), was arrested briefly at Moscow’s Sheremetevo airport earlier this morning. Liliya Shibanova told reporters that her laptop had been confiscated because it contained “illegal software”, although noted that she had been released as soon as she had surrendered the laptop. Golos, who have been criticised in Russia for receiving funding from Europe and the United States, were fined the equivalent of $1,000 earlier this week by a Moscow court for violating election regulations and publishing opinion poll results less than five days before the election.

Additionally, a number of websites have also been downed by Distributed Denial of Service (DDOS) attacks this week. At the time of writing, as well as Golos, who we mentioned above, Echo Moscow, Kommersant and all of LiveJournal‘s blogs were inaccessible. Echo Moscow editor Matthew Ganapolsky is instead publishing news on his blog when it’s available and on twitter.

Once the official Russian Duma Election 2011 results are available, we’ll post them up here.