Siberian Light has a new theme, evoking its roots.

Siberian Light has had a lot of designs over the years, but I’ve always missed the original design, with the logo of sunlight shining over an historical Siberian city.  So, I decided it was time for Siberian Light to go back to its roots, and installed a new design based on the old logo.

Here’s a picture of how Siberian Light used to look, when it launched back in 2004.  As you can see, it’s not quite the same (the columns either side of the text had to go) but, for me at least, it evokes the feel of the original site. 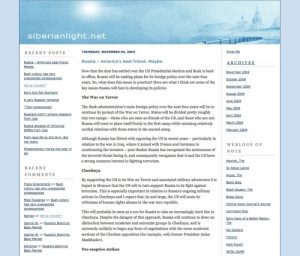 And here’s the original photograph of Irkutsk that the logo was drawn from.  It’s a picture of the embankment at Irkutsk, taken around 100 years ago.

I’m still working out some bits and pieces, so expect a few minor changes to the design over the next few days, but this is pretty much the final version.  If you spot any bugs, I’d really appreciate it if you could let me know, and I’ll get right on to fixing them!

For the geeks among you, the design is based on the 2010 Weaver theme, the same one that Anatoly uses over at Sublime Oblivion.  It’s brilliantly and easily customizable by using a control panel on the WordPress dashboard.  In fact, it’s so easy that the entire design you see here was put together in just over an hour, without me (luddite extraordinaire) needing to touch a single line of code.