Ruud Gullit has caused the biggest footballing shock of the 21st century by signing an 18 month deal to manage Terek Grozny, Chechnya’s number one football team. 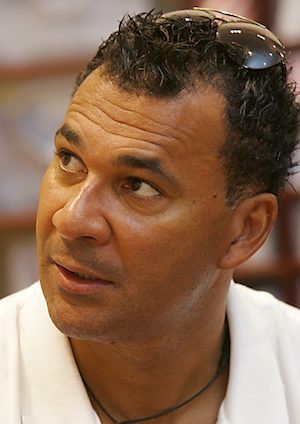 Terek, who play in the Russian Premier league, narrowly avoided relegation last season, so Gullit will certainly have his work cut out for him.  Chechen President Ramzan Kadyrov, who is thought to be the man behind the move, has set a pretty high target for Gullit though – he wants the team to finish in the top 8 next season, and ideally to qualify for Europe.

Where the money is coming from is unclear.  There is much more money in Russian football these days, but Terek aren’t exactly a major club.  But it certainly sounds like Terek have a well funded backer – before Gullit they courted former Spartak Moscow legend Oleg Romantsev as well as former Spanish international Victor Munoz (who briefly took the job as Terek manager, lasting no more than a few weeks).  Now, as well as signing Gullit, they’re talking big about a transfer deal involving one of the world’s ten best strikers, allegedly playing in the English Premier League at the moment.

Gullit was one of the world’s finest ever players, but as a manager he hasn’t been a spectacular success.  He did reasonably well at Chelsea, but didn’t really impress at Newcastle, Feyenoord or, most recently, LA Galaxy.  In fact, he’s been out of management entirely since being leaving Galaxy in 2008, leading to speculation that he’s just moving to Russia for the quick and easy money.

This will be a great boost for the fans of Terek, but I can’t help but think that Gullit doesn’t know what he has let himself in for.  For one thing, there’s the fact that he’ll be working in the murky underbelly of Russian football with murderous dictators.

But even aside from that, Gullit’s only successes have been when he has worked with a team of high quality players – anything less than the best to work with, he’s struggled.  Surely even the greatest of football romantics can’t surely see Ruud Gullit taking a struggling team from a war torn Russian province and turning them into a team of European contenders.  Can they?