About the Author: CJ Chambers is editor of Russian Watch Guide, the leading consumer guide to Russian-made watches.

These are just a few examples of significant Soviet military or scientific achievements that have become the inspiration for modern Russian wristwatches.

The company behind these history-inspired Russian watches is Vostok-Europe. Based in Vilnius, Lithuania, Vostok-Europe has been making watches for the international market since 2004 using self-winding, mechanical movements supplied by the Vostok factory in Chistopl, Russia.

“Every one of our watches has a link to an industrial or scientific breakthrough during the Soviet era which made a significant influence to human history,” explained Igor Zubovskij, the company’s Managing Director. “This is in accordance with our philosophy and slogan ‘Soviet Techno Design'”.

And these modern Vostok watches don’t just use historic achievements as a crass marketing gimmick. Each Vostok watch genuinely attempts to incorporate the spirit of the achievement in the watch’s design and function.

Take for example the newest watch in Vostok-Europe’s catalog, the Ekranoplan KM, also known as the “Caspian Sea Monster”. The Ekranoplan KM holds the distinction of being the largest ground effect vehicle ever built. 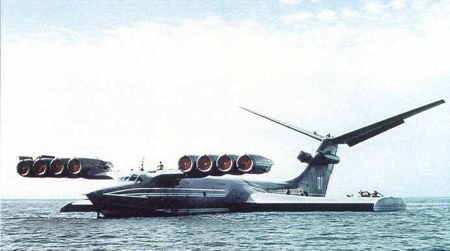 If you’ve never heard of a ground effect vehicle before, think of it as a cross between a hovercraft and an airplane. It flies near the surface of the Earth on a cushion of high-pressure air. This cushion of air is the so-called “ground effect”.

Ekranoplans were originally developed by the Soviet Union as high-speed military transports, and were based mostly on the shores of the Caspian Sea and Black Sea. The massive Ekranoplan KM measured 100 meters long, weighed 544 tons and was powered by ten Dobrynin VD-7 turbojet engines.

Like its namesake, the Ekranoplan KM watch is huge with a 47 mm case — much bigger than your average men’s wristwatch.

One interesting design element of the watch, the trigalight microtubes on the dial and hands provided for night time visibility, posed an unexpected hurdle to American export sales. Because the microtubes produce illumination from tritium gas and yield a minute amount of radiation, the watches must be laboratory tested, certified, packed and shipped according to special US regulations before being allowed into the country.

Another watch in the Vostok-Europe collection is the TU-144, named after the world’s first supersonic passenger plane. The plane’s maiden flight took place on December 31, 1968. The fleet remained in service until 1978. The TU-144 is still part of NASA’s high speed research program.

As you might expect, the TU-144 watch has classic aviator styling with a dual time function and rotating bezel with a 24 hour scale. Here’s a video about the TU-144 by the Watch Komrade.

Other noteworthy Vostok watches include the Gaz-14, a luxury-style Russian watch named after a luxury government limousine; the Arktika, which was the first surface ship to reach the North Pole back in August 1977; and the Maxim Gorky, which was the biggest airplane in the world in the 1930’s.