How Russia Today steals its titles from blogs. Or, more to the point, steals them from this blog 🙂

I was amused to stumble across this Russia Today video report about the 70th anniversary of the battle of Khalkhin Gol.

Well, do you notice that the title of Russia Today’s report from August 2009 is almost exactly the same as the title of the article I wrote in January 2008 – an article called ‘Khalkhin Gol: The Forgotten Battle That Shaped WW2‘. 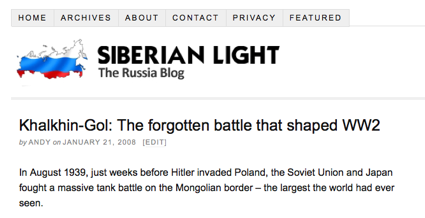 Sadly, I’m told that you can’t copyright blog titles. So, rather than being annoyed, I’m instead going to settle for being smug/amused that Russia Today reporters use Siberian Light for their research.

And for their copy writing.