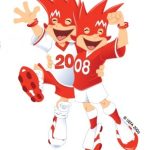 Well, well. After Russia slipped up in Israel, we all thought it was over. Surely there was no way England could slip up in their last game against Croatia, no hope left for a demoralised Russia.

After all, England were playing at Wembley, their newly refurbished spiritual home, and they only needed to a draw to secure qualification for Euro 2008.

Shame Croatia didn’t read the script. They stomped all over a woeful England on their home turf, winning 3-2 and condemning Steve McLaren’s men to a summer of watching footie on the telly, and McLaren himself to a summer of soul-searching and job hunting.

I’d like to praise the inspired way that Russia won their last game in Andorra (a must win game for Russia at the time). Sadly though, the mighty Russian team didn’t really turn up last night either, only managing to scrape a 1-0 win against Andorra, the group’s whipping boys.

Russia, it has to be said, booked their place in the finals pretty much by default. On last night’s performances, neither England nor Russia deserved a spot in the finals. And a team that can only scrape past Andorra doesn’t really deserve to be in the finals – certainly not when there are quality teams like – um – Israel out there, who were unbeaten in their qualifying matches against Russia.

Kudos to Andorra, though, 0-1 was by far their best result of the tournament.

Can you tell I’m an Englishman, by the way? And that I’m a little bit bitter?

Still, I can’t complain too much. While my compatriots are morosely watching the England-less Euro 2008 finals, I’ll at least be able to support my second team!