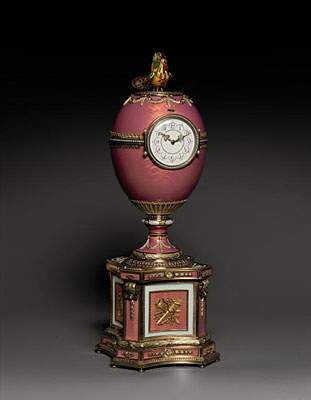 Got a few sparepennies burning a hole in your pocket?

Then you might want to head on down to London auction house Christie’s next Wednesday – as a part of Russian Art Week, they’re holding an auction of valuable Russian artwork.

Arts, books, silverware and icons worth an estimated $74 million are to go under the hammer, and much of the collection is expected to go to wealthy Russians living in London.

Top billing will be given to the Rothschild Faberge Egg, which is expected to sell for a staggering $12-18 million – a record for a Faberge egg. Made in 1902 for the Rothschild family, it was apparently never publicly documented, and has never been seen before in public. According to auctioneer Anthony Philips, the egg is also one of the most unique of Karl Faberge’s eggs:

“There are only two other known Faberge eggs that have a clock in them and also an automaton. When the clock strikes the cock come up, shakes its wings and sings.”

You can see a video of the egg here – I recommend holding out for the end of the video, where the clock is displayed in action.

For more on the history of this beautiful egg, visit Artnow Online.