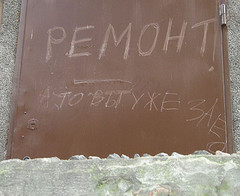 Someone in the Kremlin clearly has their creative hat on today as, in order to punish Estonia for daring to oppose the mighty Russia, the railway line into Estonia has been mysteriously closed for repairs:

“We haven’t imposed any economic sanctions against Estonia and have no plans to do so. But from May 1, we plan repair works. We therefore plan to change the delivery schedule,” said a spokeswoman for Russian state railways.

The upshot of this is that Russian oil and coal exports that would ordinarily be shipped to Estonia via rail is instead sitting around in a train station somewhere in Russia.

Good for the environment, I’m sure you’ll agree but, as most of the oil was destined for re-export, rather than consumption within Estonia itself, the major outcome will be that consumers across the world will be grumpy again and Russia, as usual, will get the blame for doing something daft. And rightly so – cutting oil supplies to consumers further down the line to score petty political points achieves nothing more than paint Russia as an unreliable supplier.

Meanwhile, the Estonian ambassador to Russia was attacked by Nashi protestors:

Marina Kaljurand’s bodyguards were forced to fire tear gas to beat back the group of 30 youths, members of the Kremlin-backed Nashi (Ours) youth group, who had forced their way into the conference, shouting that Estonia was a fascist state.

Presumably the tears streaming down the faces of the Nashi faithful meant that their vision was impaired when this happened:

The protesters also blocked the arrival of a Swedish embassy vehicle, prompting Sweden to lodge a “strong verbal protest” with the Russian embassy in Stockholm and summon the Russian ambassador to account for the incident.

“The ambassador’s car was stopped and attacked by a mob as he was leaving the Estonian embassy. They kicked the car and tore off the Swedish flag. The ambassador was not injured but the atmosphere was very aggressive,” said a Swedish foreign ministry spokesman.

Oh, what a glorious day for the new, improved Russia.