Russia has announced ambitious plans to build six new aircraft carrier battle groups, a move which could return Russia to the top ranks of naval powers. 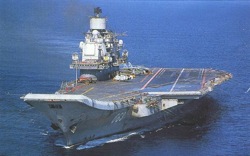 The Russian Navy has announced ambitious plans to turn its navy once again into a force to be reckoned with. Key to Russia’s naval ambitions is the construction of 6 aircraft carrier battle groups, and major upgrades to its fleet of nuclear submarines.

Admiral Vladimir Vysotsky outlined the scale of the ambitious plan, telling reporters assembled in Moscow that:

“Everything should be included in the system, including aircraft carriers.”

According to the Moscow Times, he told reporters that the planned systems would be split between the Russian Navy’s Northern and Pacific Fleets (presumably 3 carrier groups per fleet), and would “operate in close interaction” with Russia’s military-satellite system as well as Air Force and air-defense assets.

Construction of the new Russian aircraft carriers is to begin in 2012, which would see the first carriers coming into operation somewhere around 2020.

If they can actually bring this project to fruition (which, admittedly, is probably a very big if – just four years ago, Russia was planning to move to a smaller, defensively-oriented navy), this would give Russia a navy which would be able to project power on a global scale and, while it would not give it enough firepower to match US fleets, it would probably ensure that Russia keeps slightly ahead of rising naval powers like China and India.

Russia currently only has one aircraft carrier – the Nikolai Kuznetsov. Although, actually, to call it an aircraft carrier is probably somewhat charitable. In reality, it is classified as an “air capable cruiser” and, being diesel powered, is easily outmatched by its nuclear powered rivals.

Rather embarrasingly for the Russian Navy, the Kuznetsov’s seaworthyness is also rather suspect. While on an exercise earlier this year, the Kuznetsov was permanently accompanied by two tugboats, in case it broke down.

Perhaps it’s just as well, then, that Russia is also introducing a new generation of nuclear submarines to patrol the world’s oceans.

The first Borei submarine was launched in February 2008 and is undoubtedly a class above Russia’s other, Soviet designed, submarines (although still not a match for US submarines). It is the first Russian nuclear sub to incorporate a pump jet propulsion system, and has a much quieter hull design.

Despite a few lingering concerns about the Borei submarines’ Baluva missile system, the Russian Navy is keen to build on this success (and to forget the Kursk disaster), so will complement plans for an aircraft carrier group with further modernisation of the Borei class.

“Starting with the fourth submarine, we will begin modernizing this class. The modernized Borei submarines will be the core of Russian naval nuclear forces until 2040.”

“We are aspiring not only to introduce new technologies, not only to compete with the West, but to take completely new steps which would allow us to look at submarine technologies of the middle of the 21st century.”

Interesting times, indeed, for the Russian Navy. The question now is will the Russian economy remain strong enough over the next few decades to pay for all this? And, if they can, will this increase pressure on other second tier navies with ambitions to project power across the oceans, such as China, India, and the EU, to respond in kind?