Blog > Some belated thoughts on the Russia-Georgia war
Blog

Some belated thoughts on the Russia-Georgia war

Siberian Light returns from vacation with some belated thoughts on the Russia-Georgia war. 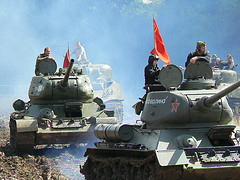 As is traditional, something exciting happens in Russia during August. As is also now traditional I go away on holiday throughout August, close down Siberian Light, and completely miss the excitement.

This August, of course, Russia and Georgia both managed to find themselves in the middle of a small, and entirely unnecessary war. Following the war and subsequent diplomatic developments via two day old copies of international newspapers has given me the opportunity to reflect on a few of the key issues of the past month or so at a rather more leisurely pace than usual.

So, here, without further delay, are some belated (and at times slightly random) thoughts on the Russia-Georgia crisis.  Feel free to add to these, or disagree with me in the comments…

Who started the war? 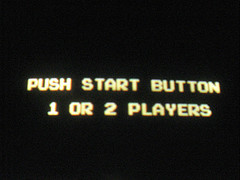 The Western media is doing a very good job of painting Russia as the bad guy in this war. And it’s pretty clear that Russia hasn’t really covered itself with glory. But the ultimate blame for this silly little war must, I believe, go to Georgia and it’s President, Mikheil Saakashvili.

Ive heard a lot of stories about whether Russia actually started this war. People arguing that the provocations started the war, or that Russian troops were ready to go the minute Georgia launched their invasion of South Ossetia.

Yes, Georgia faced some pretty strong provocations in the lead up to the war. Russian planes had been overflying Georgia for months, and its troops had been coming under sporadic attack from across the border in South Ossetia.

But all of these provocations were relatively small scale and any leader worth his salt should have considered the wider strategic implications, considered the possibility that they were designed to provoke an over-reaction from Georgia, considered the overwhelming strength of his opponents military allies, and found a less confrontational way of resolving the issue than by launching a full-on invasion.

Instead, Saakashvili took the most monumental gamble, invaded South Ossetia, and walked straight into a carefully laid Russian trap. And, to top it all off, his military let him down horribly when they failed to even attempt to close the tunnel – an easy chokepoint – that Russian forces were soon to pour through en route to their counter-attack.

Imagine if you, a weedy little nerd, were standing next to a seven year old kid who was calling you names. And his muscle bound father were standing behind him, menacingly tapping his baseball bat into his palm. Would you really punch the little kid on the nose?

Who won the actual shooting war? 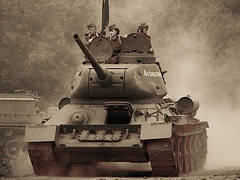 Ummm, Russia.  But how well did their military actually perform in combat?

By all accounts I’ve seen, they turned in a solid, if unspectacular performance which made the best of their strengths (overwhelming manpower, lots of tanks and lots of airplanes), and tried to minimize their weaknesses (not particularly well trained troops, and a lack of technological superiority).

Some 15,000 Russian soldiers and 150 tanks deployed in a field of operations as small as South Ossetia were always going to roll over the Georgian army which, except for some high quality professional and US trained units, is still largely conscript based.

The Russians were given a big hand, though, by some atrocious Georgian military planning.  The main road from Russia into South Ossetia goes through the Roki Tunnel, a natural chokepoint for a Russian armour based assault.  Incredibly, though, the Georgia military took no steps to close the tunnel to Russian forces.  True, they couldn’t get enough manpower to the tunnel quickly enough to take possession but, once it became evident that a full scale Russian assault was underway, they should have at least made every effort to bomb the entrance to the tunnel.

The big story, though, was probably Russia’s performance in the air.  Facing just 18 Georgian planes, Russia was always going to achieve dominance of the air, and used it well to target Georgia’s key military and industrial infrastructure.

But, despite their overwhelming air superiority, Georgia still managed to shoot down at least seven Russian planes (the exact number is unclear).  Partly this must be due to a well drilled performance from Georgia’s air defence units, but more significant were Russian weaknesses.  In particular their lack of communication ability, and tactical mistakes (they didn’t take out Georgia’s air defence system as quickly as they could have) counted against them.

Still, Russia will be relatively pleased with its military performance, particularly when contrasted with previous performances in Chechnya.  They’ve proved that their military has come a long way over the last few years, and have demonstrated clearly to their weaker neighbours that picking a fight with Russia is a really, really bad idea.

US analysts will also be thrilled.  Not only because Russia have clearly demonstrated that their military isn’t a match for a well drilled US force.  But, more importantly, they’ll be drooling over the prospect of getting their hands of terabytes upon terabytes of juicy data from their Georgian ally…

Was Russia right to recognise South Ossetia and Abkhazia as independent states? 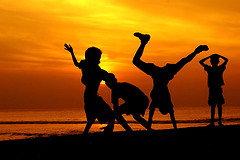 Recognising both South Ossetia and Abkhazia as independent states may cause Russia some short and long term problems. But, on balance, I think Russia made the right decision to recognise them.

Some have argued that it makes Geogia’s accession into NATO easier, because NATO requires that member states have resolved their territorial disputes.  Long term, I think Russia’s decision to recognise both states will make it easier for Georgia to fomally abandon its claims to them, in favour of NATO membership.

And, of course, Russia’s decision to recognise two new independent states without any international support has done no good at all to its relations with the rest of the world in the short term.

But, on the plus side, Russia has grabbed two new vassal states, and pretty much cemented their independence from Georgia.  More than likely, the next step will be to bring those states into the Russian Federation formally – although probably not for a few years yet.  If you’re Russian, it’s hard to argue against increasing the size of the Russian state.

Recognition will also, oddly, have the effect of increasing stability in the Caucasus, and will reduce tensions between Russia and Georgia in the long term.  Georgia will eventually see sense and abandon its claim to its two provinces in favour of (a) recognising reality and moving on with life and (b) getting NATO membership.   And if there is no territorial dispute for Russia and Georgia to focus on, they can instead focus on building a reasonably rational and peaceful relationship.

Finally, it’s worth noting that Russia was never going to have a better opportunity to recognise South Ossetian and Abkhazian independence.  It really was a case of use it, or lose it.

It’s clearly in Georgia’s interests to join NATO.  But the real question is – does NATO want Georgia?

Initially, my view was that NATO would have to be crazy to accept Georgia as a member now, after the war.  Georgia is geographically isolated from the rest of the Alliance, and would be next to impossible to defend militarily from a Russian attack.  And, of all the NATO member countries, it would be the least predictable and the most likely to get itself into a fire-fight.

However, I’m coming to believe that in the long term it may well be in NATO’s interests to allow Georgia to join.  If Georgia had been a full-member in August, I’d argue that the war would probably have been avoided.  It would have acted as a deterrent to Russia but, more importantly, Georgia would have been told in no uncertain terms to stop pissing around and that to invade South Ossetia and directly provoke Russia would undermine the stability and security of the Alliance as a whole.

But, even if a conflict were to break out, Georgia’s NATO allies would not necessarily be obliged to come to its aid.  A lot has been said about Artice 5, and many have argued that it would compel NATO members to come to the defence of any ally under attack .  But actually Article 5 does not compel members to come to the aid of fellow members.  It was first invoked after 9/11 to express solidarity with the United States, but it was certainly not invoked with Argentina attacked Great Britain in the Falkland Islands in 1982.

If Georgia sees sense, and resolves its territorial disputes, I wouldn’t be surprised to see it on the fast-track to membership.