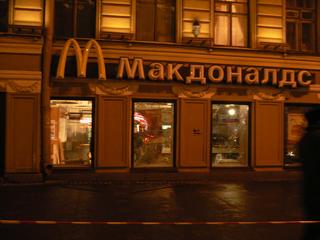 Russia and Georgia destroy the McDonalds theory of war

Remember the McDonalds theory of war – that two countries advanced enough to have a McDonalds franchise could never go to war? Well, it’s finally been blown out of the water by the Russia-Georgia war of 2008.

Remember the McDonalds theory of war – that two countries advanced enough to have a McDonalds franchise could never go to war?

Well, it’s finally been blown out of the water by the Russia-Georgia war of 2008.

What? Georgia has a McDonalds??

Russia of course, has long been familiar with Ronald and his seductive ways – McDonalds opened their first Moscow restaurant way back in January 1990, hammering one of the final nails in the Soviet Union’s coffin.

What is the McDonalds theory of war?

Clearly tired of the vague, yet strangely complex theories that international relations theoreticians came up with to try to predict whether or not two countries would go to war, economist Thomas L Friedman took a fresh look at the whole concept.

In his 1996 article, he developed his McDonalds theory of conflict prevention – namely that “no two countries that both have a McDonald’s have ever fought a war against each other.” Why not?

“…when a country reaches a certain level of economic development, when it has a middle class big enough to support a McDonald’s, it becomes a McDonald’s country, and people in McDonald’s countries don’t like to fight wars; they like to wait in line for burgers.”

To say that countries with McDonalds franchises are immune from war is clearly not true – the United States, spiritual home of the Big Mac, is one of the most war-prone countries in the world.

But Friedman is clear that his theory doesn’t apply to wars between one country that has a McDonalds and another that doesn’t.  And not one of the countries that have been squashed by the mighty American military machine has (so far!) had a McDonalds.  The bombing of Kosovo was (technically) not a war, I’m told – it was a conflict between an alliance of countries, and a single country (although admittedly every single country taking part had a McDonalds at the time of the conflict).

Equally, neither do minor border skirmishes by countries like India and Pakistan count, even though they’re both rather partial to a burger.

McDonald’s in Moscow delivered burgers to both sides in the fight between pro-and anti-Yeltsin forces in 1993.

So, there you have it.  While we’re at it, I’d note that the Russia-Georgia war has also dealt yet another blow to the Democratic Peace Theory – assuming, of course, that you class either Russia or Georgia as a functioning democracy.