Rice and Gates in Moscow to discuss missile defence

As Condoleeza Rice and Robert Gates visit Moscow, hopes are not high that Russia will be able to change the US position on missile defence. 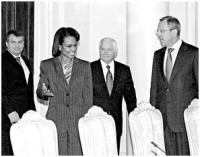 But the main negotiations are planned to be held on Tuesday, when the American guests will meet their colleagues  Anatoly Serdyukov (Minister of Defence) and Sergey Lavrov (Minister of Exterior). Their dialogue will be held in the same two plus two format as before.

On the eve of this meeting in Moscow Washgton made very careful predictions about its outcome. Before these negotiations US Minister of Defence Robert Gates shuffled all responsibility for the meetings success onto the Russian side:

Russia needs to decide if it wants to be a real partner or not. From my point of view, we put a lot of things on the negotiating table. And now its high time for Russia to answer.

Gates made it clear that no more new offers about anti-missile defence would be suggested to Moscow. Russian Vice-minister of Defence Alexander Grushko confirmed this, saying that:

The negotiation process has not been finished yet. With any result, Russia will find reliable ways of providing its security. But our choice is to prefer cooperation and not confrontation.

US anti-missile system placement: is there any hope for Russia?

Experts say that Tuesdays negotiations will be devoted to the most pressing problem of Russia-US relations- the placement of US anti-missile systems in Eastern Europe countries  specifically, the Czech Republic and Poland. 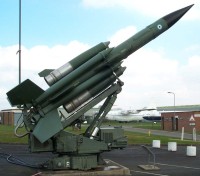 Negotiations, which have been taking place between Russia and the US since February are close to their finish. And that is why we can conclude that placement of anti-missile elements in Eastern Europe is no longer a question of discussion. The only hope for Russia in the diplomatic meetings is to agree some acceptable conditions for all sides.

The last two plus two meeting took place last year in October. Then, according to, experts, some progress was made  in particular, some representatives of the US administration mentioned the possibility of Russian military inspections of anti-missile systems in Poland and Czech Republic.
Also it was suggested some tactical decisions, for example, not to direct radar in Czech Republic at Russia and not to place missiles in Polish mines. Moscow approved these initiatives, but in the protocol of negotiations these agreements were not fully resolved.

Anonymous sources in the Russian Ministry of Defence expressed regret that the Americans havent brought any new suggestions about the problem. According to the opinion of militaty officials, this means that future negotiations will be no more than a formal meeting. But for Russia now it is very important to decide how the Russian military will inspect anti-missile objects in Eastern Europe.

Also in October of last year it was discovered, that USA has been holding secret negotiations with Turkey about placement their anti-missile system. This information was given by press-secretary of Pentagon Jeff Morrell. When talking about Robet Gatess visit to Ankara, he noted that.

The main topic of discussion was military operation of Turkish army in Iraq. Moreover, he has duscussed plans of the development of anti-missile system with the President Gule and the Prime-minister Erdogan

More recently, it was revealed that the US is discussing its participation in an Indian missile defense system.[Add text about India too, so I can link to old article.

All these facts leave less oportunities for Russia to significantly influence the anti-missile system placement, and dont leave any room for optimism about Tuesdays negotiations.