Mikhail Prokhorov’s dramatic entry into the 2012 Russian Presidential race has caused confusion among analysts. Put simply, no-one can fathom why Russia’s third richest man would want to have another stab at entering Russian politics.

After his humiliating failure this summer – Prokhorov announced to great fanfare that he would turn Right Cause into a political force, and was then abruptly kicked out in an internal party coup – most had thought that he would step back and concentrate on his business interests, among them his ownership of the New Jersey Nets basketball team.

But instead Prokhorov has, in his own words, taken “probably the most serious decision in my life. I am running for president.” 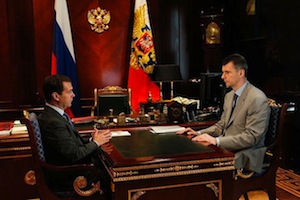 However, I struggle to see how Prokhorov can gather the votes needed to finish second in this election, let alone to provide a serious challenge to Putin.

Where on earth is he going to get the votes from, for one thing? He’s certainly not going to take away many votes from Gennady Zyuganov (Communist) or Vladimir Zhirinovsky (nationalist), who each have a solid core of supporters. He could take some from Putin, but you have to assume that most of Putin’s supporters (the legitimate ones anyway) are voting for him because they’re pretty happy with him – so why would they vote for someone offering something different?

In fact, I’m not entirely sure that Prokhorov could even force his way onto the ballot. Because he is not piggy-backing onto a registered political party’s campaign, he will have to gather two million signatures just to get onto the ballot. That’s not an easy task – just ask Mikhail Kasyanov, who in 2008 reached the magic 2 million mark only to be told by the electoral commission that too many of the signatures were invalid. (As an aside, Andrei Bogdanov, head of a party that polled 0.13% in the previous Duma election, managed to reach 2 million signatures with no problems and enter the Presidential race, where he polled less than 1 million actual votes.)

Instead, I think Prokhorov is going to use this election to try to lay the groundwork for future success.

It may well be that Prokhorov has watched events unfolding over the past couple of weeks and spied an opportunity. Perhaps he is gambling that Putin’s weakness will be exposed by the current protests and that, in three months time, the Russian political landscape will be sufficiently confused to give a candidate like himself the opportunity to step in and offer an alternative vision with some credibility (and which does not, like Communist Party boss Gennady Zyuganov’s vision, scare both the voters and Washington).

What happens, for example, if Putin scrapes over the 50% mark in March, avoiding the need for a second round run-off only because he has the fraudulently fanatical backing of virtually every single person in Chechnya?

I think that’s a possible scenario, although a fairly unlikely one. And, even if it does come about, it’s almost certainly going to be Zyuganov in second place, not Prokhorov.

More likely, in my opinion, is that Prokhorov is positioning himself to become Russia’s next Prime Minister.

With Dmitry Medvedev badly wounded, a decent showing by Prokhorov in the Presidential election, particularly if he stays away from being *too* critical of the current Government, would give Putin thge opportunity to bring another ‘reformer’ into Government to balance his more conservative tendencies.

And, for Prokhorov, the role of Prime Minster would give him a platform from which to develop his own political ambitions and potentially to position himself as Putin’s heir apparent.

What do you think?