But then Medvedev, the Russian President and technically Putin’s boss, intervened in spectacular style. 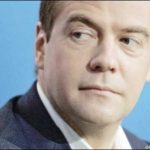 “It is absolutely inexcusable to use expressions that in effect lead to a clash of civilizations – such as ‘crusades,’ and so on – that is unacceptable,” Medvedev said.

“Russia did not exercise [the veto power] for one reason: I do not consider this resolution to be wrong. Moreover, I believe that this resolution generally reflects our understanding of what is going on in Libya.”

That’s a pretty direct rebuke of Putin, stronger by measures of magnitude than anything we’ve ever heard from Medvedev before.

I’m sure there will be cynics who think that it’s a fake argument. I may be wrong, but I can’t imagine that Medvedev and Putin, conservative men to their core, would pick now to demonstrate that they are both independent men. There are so many other, less politically charged debates that they could pick – why choose this one?

Medvedev’s comment today is the single most surprising story I’ve heard coming out of Russia in the past decade.

I tell you one thing. I’m waiting with baited breath for Putin’s response…

Why Putin’s response was two-faced and cowardly. Or stupid.

As an aside, I thought I’d go into who I think is right. In my opinion, Medvedev. Why? Because Russia knew damn well what it was getting into when it vetoed the UN Resolution.

The US and European powers have always made clear that the first step in establishing any no-fly zone is to establish air superiority. It doesn’t mean just waiting until a Libyan airplane takes off and trying to shoot it down. It means destroying the Libyan air force’s command and control facility, allowing them to patrol freely over Libya.

And, more, Russia knew that “all necessary measures… to protect civilians and civilian populated areas under threat of attack” meant bombing Libyan military on the ground, and again, their command and control centres, which would be located in cities.

You can argue all you want about whether the UN resolution is a good one or not. But the fact is, Russia knew that this is what the US, France and UK were going to do. They knew exactly what would happen once the resolution was passed, and they still didn’t vote against the resolution.

In other words, Russia was not opposed to what was about to happen.

So to turn around now, express anger and surprise at the way things have developed is simply two-faced. Either that, or it’s plain ignorant. Take your pick, I suppose!

For Medvedev, there simply was no way that he could turn to the world with a straight face and agree with Putin.