Otkritie bank hit the headlines for valuing Facebook at $74 bn, but real story for Russia is that mail.ru is overvalued

Russian bank Otkritie have made headlines this week because of their valuation of Facebook at a staggering $76.4 billion – a full 50% higher than any previous valuation of the social media giant.

They’ve been criticised in the press by some for making an over-generous valuation based on some loose assumptions, and that may well be true. But it shouldn’t overshadow what is a fascinating overview of the Russian internet market and the value of mail.ru, the true focus of Otkritie’s report. 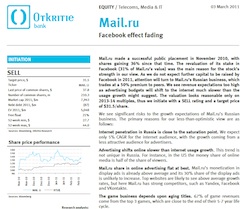 Mail.ru made a successful public placement in November 2010, with shares gaining 36% since that time. The revaluation of its stake in Facebook (31% of Mail.ru’s value) was the main reason for the stock’s strength in our view. As we do not expect further capital to be raised by Facebook in 2011, attention will turn to Mail.ru’s Russian business, which trades at a 50% premium to peers. We see revenue expectations too high as advertising budgets will shift to the internet much slower than the usage growth might suggest. The valuation looks reasonable only on 2013-14 multiples, thus we initiate with a SELL rating and a target price of $31.5/share.

Read the full report and they explain exactly why they think Mail.ru is over-valued – basically it’s because their core business is in trouble. Although Russia’ s internet market is growing, it is reaching saturation point. Mail.ru also doesn’t seem to be a particularly dynamic company – it’s seen as overly reliant on online games for its revenue, and isn’t performing as well as it could be in the online advertising market. In a sense, Mail.ru’s investments in Facebook and other external companies are what are propping up Mail.ru’s valuation.