How singer James Blunt prevented WW3 by refusing to start a fight with Russian paratroopers in Kosovo. 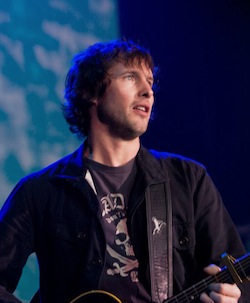 James Blunt, a British pop singer best known for his song “Your Beautiful”, is an unlikely candidate for savior of the world. But, by all accounts, he played a key role in preventing a skirmish between British and Russian troops at Pristina Airport in Kosovo.

If you know your Kosovo history, then you’ll probably have heard that Russian paratroopers beat the British to Pristina Airport and under pressure US General Wesley Clark reportedly told the advancing British troops to secure the airport at all costs – even if it meant using force to push the Russians out. British General Mike Jackson, being an all round good sort (probably a top notch cricketer) had his head screwed on, though, and wasn’t having any of it. Although subordinate to Clark, Jackson disobeyed his direct order, and told the advancing British troops not to engage the Russian soldiers, reportedly telling Clark over the radio “I won’t start World War 3 for you”.

It’s well known that Blunt was an officer in the British Household Cavalry, and that he served in Kosovo, but until now there hasn’t been any indication of his role in events at Pristina airport. Sadly, the headlines, which even in the BBC screech out about how “Singer James Blunt Prevented World War III”, don’t quite live up to their promise. Yes, Blunt was commanding the British troops on the ground advancing on Pristina Airport and, yes, he was baffled by Clark’s order to take the airport at all costs…

“The soldiers directly behind me were from the Parachute Regiment, so they’re obviously game for the fight.

“The direct command [that] came in from Gen Wesley Clark was to overpower them. Various words were used that seemed unusual to us. Words such as ‘destroy’ came down the radio.”

But what did James Blunt actually do? Well, um, not quite sure really. All he says in the BBC interview was that he “party to the conversation” between Clark and Jackson.

Did anyone mention that Blunt has a new album out?

*By the way, although I’ve heard that some US Generals and the US Senate were pretty pissed at Jackson’s insubordination, as far as I know Wesley Clark has never spoken publicly about the incident. If anyone knows any different, I’d really love to hear.

On a related matter, you might want to read Tim Newman’s report of a conversation with one of the Russian Paratroopers at Pristina Airport