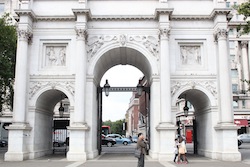 If you think that attending Gorbachev’s birthday party in London next year would be too backwards looking, then how about attending the next major Russian bash in the British capital, at Marble Arch in 2012?

According to press reports, negotiations are taking place over plans to host a ‘Russian House’ at the iconic London Marble Arch, to celebrate Russia’s involvement in the 2012 London Olympics. London’s Evening Standard reports:

“A temporary multi-storey canopy will be erected around the arch and some of the surrounding parkland will be requisitioned.”

Pretty much every major country builds a temporary cultural centre of some kind in the Olympic host city – there are also plans afoot for a French venue at Billingsgate Market, and a Dutch House at Alexandra Palace for instance – but Russia has developed a reputation for hosting the best parties, a reputation it will be keen to protect as the host of the 2014 Sochi Winter Olympics.

I wonder if they’ve realised, though, that Marble Arch is not just an iconic London landmark; it’s a very busy roundabout…