The EU’s Lumbering Elephant versus the Nimble Russian Bear 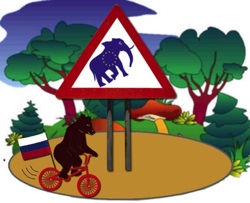 This September, the heads of each of the EU’s 27 member states met in Brussels for what was only the Union’s 2nd ever emergency summit.  Russia had just crushed its neighbour Georgia in a short, sharp war, and only one item was on the agenda – how should the EU respond to a resurgent Russia on its Eastern borders?

After a full day’s discussions, the 27 wise leaders of the European Union managed to reach the not very startling conclusion that “relations between the EU and Russia have reached a crossroads.”  After screwing up all their courage, they went on to warn Moscow that EU-Russia relations would be subjected to “a careful in-depth examination” at the next scheduled EU-Russia summit.

Not exactly the kind of words that would cause the Kremlin, buoyed by an overwhelming military victory to quake in its boots.

Certainly, the Russian media didn’t think much of Europe’s strong words. “Europe Can Keep Sucking Our Oil and Gas,” was the delightfully crude headline emblazoned across Russian tabloid Tvoi Den.

If French President Nicholas Sarkozy had stood outside of the Kremlin just after the summit and put his ear to the door, he would have heard the sound of two vodka glasses being clinked together, and the harsh laughter of Dmitry Medvedev and Vladimir Putin, the two men who run Russia.

By almost every objective measure – population, GDP, military spending to name but a few – Russia is inferior to the European Union.  So why does it seem that Russia is running rings around a beleaguered EU?

Put simply, it’s because the EU draws its strength from unity and Russia is one of the most divisive issues facing the Union today.

The EU is made up of Trojan Horses, Strategic Partners, Friendly Pragmatists, Frosty Pragmatists and New Cold Warriors.

The list of Strategic Partners (those countries that Leonard and Popescu describe as enjoying a ‘special relationship with Russia’) is relatively small, but contains three of the powerhouses of EU politics – France, Germany and Italy.  Towards the other end of the scale, the group of Frosty Pragmatists (those countries ‘less afraid than others to speak out against Russian behaviour’) is larger, but contains a just one major power – the United Kingdom.  This, combined with the presence of Poland in the ‘overtly hostile’ New Cold Warriors camp, is enough to ensure that the scales of European Union opinion on Russia are frustratingly balanced.

Each EU member state has its own reasons for being either friendly or hostile towards Russia.  Sometimes these reasons are to do with historical emnity (Poland is a particular case in point here).  Other times, it’s because of business interests.  Greece and Cyrpus, for example, are widely seen to be strong allies of Russia within the EU, and have on occasion threatened to use their veto to defend Russian interests.  And, of course, the prospect of becoming overly dependent on Russian energy supplies is making everyone nervous these days.

…  versus the nimble bear

Russia has raised the game of divide and conquer to an art-form..

Russia isn’t the only country that takes advantage of the European Union’s divisions.  The United States regularly takes advantage of its relationships with the UK, Holland and Poland, to name but a few countries.  In fact, every country’s diplomatic service probably spends a great deal of time thinking about how it can use the tactics of ‘divide and conquer’ effectively against the European Union.

But Russia has taken advantage of European complacency about its weakness, and raised the game of divide and conquer to an art-form.

Russia has assiduously courted smaller EU member states, such as Greece to which it provides substantial military support and Cyprus which receives unstinting political support in its dispute with North Cyprus).    At the same time, it has not been averse to threatening other weak EU states and, over the past 5 years, Russia has cut off oil supplies to Estonia, Latvia and Luthuania – each time, co-incidentally, in the midst of a poltical or economic dispute.

But Russia’s real strength has been in building relationships with its ‘Strategic Partners’.  In particular, it has played on France’s desire to see a multi-polar world, and expended considerable energy on increasing trade with Germany and in wooing key German politicians.

Through an early recognition of Europe’s weaknesses, and an astute manipulation of Europe’s member states Russia has been able to outwit its larger neigbour(s) to the West.

But there is still danger for Russia.  No matter how nimble it is, and how sharp it claws, the EU remains an elephant.  The European elephant is slowly waking up to the danger that Russia poses and, if the EU’s 27 member states ever manage to reach a common position, Russia could find itself squashed underneath the feet of an angry Elephant…