Speculation is whizzing around the internet that a photo from the 1980s shows a KGB-era Vladimir Putin standing next to US President Ronald Reagan in Red Square, pretending to be a tourist.

Here’s the picture, discovered in the Reagan archives. Apparently, Putin’s the guy on the left in the stripy t-shirt, camera hanging nonchalantly round his neck. 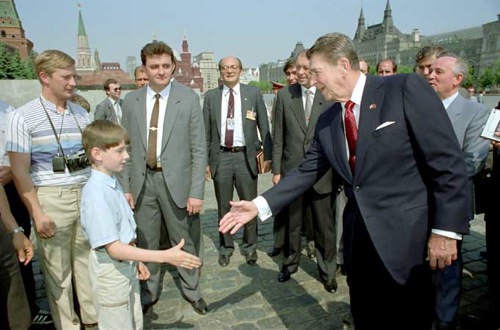 Well, he’s certainly got same the thin blonde combed-across hair and looks to be roughly similar in build to today’s Putin. But is this really a genuine Putin Reagan photo?

According to the blogs (Hot Air are one, and the Weekly Standard are in on it too), it’s Putin, no doubt. The photographer has even “confirmed that the man was Putin.”

But, hang on a minute. Go across to the National Public Radio story cited by the Weekly Standard, and what you actually get is the following quote from photographer Pete Souza:

Souza says he remembers turning to one of the Secret Service agents standing nearby. “I can’t believe these tourists in the Soviet Union are asking these pointed questions.” The agent replied, “Oh, these are all KGB families.”

Not a single word about Putin. So, other than a reasonable likeness, and the knowledge that Putin was in the KGB and the man with the camera might have been, there’s absolutely no evidence to indicate that this is a Putin Reagan picture.

Personally, I reckon it’s a load of old nonsense. It’s a good story, but it’s just some blonde guy with a camera. What do you think?