Sublime Oblivion has devised a grid to plot each Russia blogger’s political stance.

If you want to know the state of Russia blogging today, do no more than head over to Sublime Oblivion to check out his inspired idea of slotting each Russia blogger into a 2d matrix; their position based on their political views. 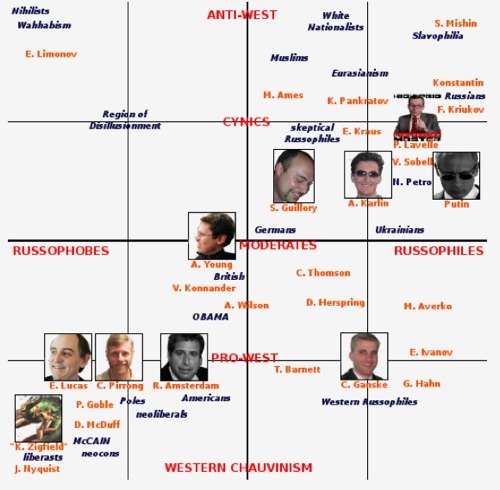 Head over to Sublime Oblivion for the full matrix, which is fully clickable (no idea how he did that!) and has, as you’d expect from Anatoly, exhaustive analysis.

I’m amused to see that he’s spot on when it comes to describing Siberian Light:

Siberian Light is the centrist par excellence amongst bloggers. Though he personally has a rather dim view of the Putin administration, Andy mostly focuses on aggregation and allows readers to make up their own minds.

And even more amused to find out that, as a centrist par excellence, I come in ahead of such leading lights as Geoffrey Hosking. Although, I have to admit, I read a lot of his work early on when studying Russia, and must have been heavily influenced.