British RAF jets are intercepting Russian Tu-95 bombers once a week, at a cost of $12 million a year. 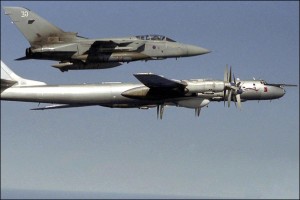 The Sun is, of course, righteously indignant at the cost to the good old British taxpayer. According to them, it costs approximately £30,000 ($60,000) per hour to keep an RAF fighter in the air. They’ve calculated that, over the past seven months, the RAF has spent more than £3.5 million ($7 million) to meet the Russian threat.

Buried mid-way through the article is the news that none of the Russian bombers have entered British airspace and, in truth, almost all of the contacts have been over the Artic or the North Sea. You would never know this from the article’s title though – “Hey you, get off of our cloud”.

Or from the over-worked ‘senior RAF source who reports exactly what Russian command want to hear:

We have to take these bombers seriously, just in case. It runs us ragged.

I’m sure the RAF are quite right to intercept Russian bombers flying near British airspace – they are after all, flying very close – but it’s indicative of the poor press Russia is getting at the moment that hysterical over-reaction is now becoming the norm.

If you want to see the impact reporting like this is having on many in the British public, take a look at the comments to The Sun article.

Oh, and two more quick thoughts before I go. I wonder how much it’s costing the Russian air force to send these bombers out? Probably not as much as the British RAF. And, finally… I wonder if the Russian Air Force would tell me how much it costs if I were to ask???

The future of reform in Russia