More than “16,000 police officers, Interior Ministry troops and police helpers” were on the streets of Moscow this weekend to “ensure order” during the Moscow City Day celebrations (source: RIA Novosti).

The weekend’s festivities passed off without any serious trouble, which is great. But I wonder, was anyone really expecting the kind of trouble that requires 16,000 people to keep order?

For me, the RIA Novosti article brought to mind the recent London riots. During a couple of days of rioting that captured headlines around the world, the number of police on the streets of London hovered around the 6,000 mark. It was only after the trouble hit its peak that police numbers were increased to reach the magic number of… 16,000. 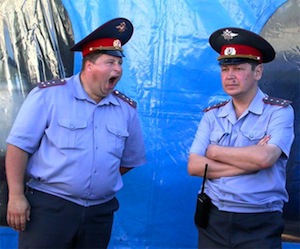