According to media reports, North Korea are in serious talks to rent a massive area of abandoned farmland in the Russian Far East. Sounds a bit dull on the face of it, but actually it raises some intriguing questions.

First, let’s hear from a un-named Russian official who explains the deal to RIA Novosti:

“The North Korean authorities are planning an unprecedented agricultural project – to create a farm in the Far East to grow soybeans, potatoes, corn and other crops. Everything that Korean citizens need, because the issue of food shortages there are acute from time to time due to land shortages.” 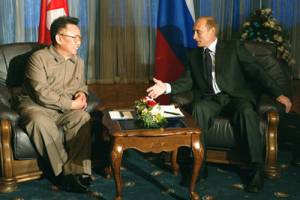 On the face of it, the deal makes sense for Russia and for North Korea. Russia huge tracts of former farmland that it isn’t using at the moment – over 200,000 hectares in the Amur region alone. Former collective farms, they could easily be brought back into use. And, of course, North Korea is facing acute food shortages – partly because of its own internal economic problems, and partly because very little of the land in North Korea is suitable for agricultural use.

But a couple of interesting questions have popped into my mind.

First up, the price. According to Agrimoney.com, high quality farmland in the Black Earth region goes for around $500 per hectare (that’s to buy the land). Now, Amur isn’t the Black Earth, but according to RIA Novosti, North Korea look like they’re going to get the land for a mere $1.70 a hectare a year. I don’t know what the going rate for farmland in the Russian Far East is, but $1.70 a hectare sounds pretty low to me. So what’s Russia getting in return?

The second is about the implications of North Korea renting the land, rather than just buying the finished product (the crops). Presumably, this is because North Korea thinks that renting the land and farming it itself is going to be more cost effective than paying someone else for the finished product. To do this, though, they’re going to need labour. I reckon that Russian labour is going to be expensive, so the obvious alternative is to ship in North Korean labour. But where will it come from? Will the workers be regular, paid workers? Or will they, like in the 1990s, be North Korean prisoners shipped in to do the work?