Russian History > Soviet Union > What was the first animal in space?
Soviet Union

Its generally accepted that the first animal in space was Laika, a dog sent into orbit by the Soviet Union in 1957. Sadly Laika died whilst in orbit but her name lives on as part of an incredible period in space travel.

If you ask the question what was the first animal in space, Laika is the only candidate for most observers although you may be given conflicting answers from some areas. This may be due to the technicalities over the question. 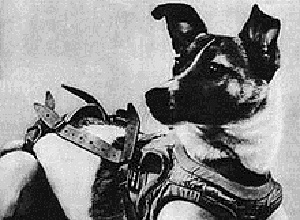 Strictly speaking, Laika was the first animal to orbit the earth but prior to her mission, other animals had been sent into space by both the Soviet Union and the United States of America.

As the US developed their space programme in the 1940s with the help of German designers and captured V2 rockets, experiments involving animals were widespread. Their use was seen as a logical precursor to sending humans into orbit and it wasnt long before these rockets crossed into space itself.

In 1947, the United States sent a V2 into space that carried fruit flies. Therefore, the correct technical answer to this question lies in this mission. Further expeditions followed involving mice and dogs until the Soviets made their breakthrough by successfully orbiting the earth.

The successful space flight took place on November 3, 1957 when Laika was launched along with Sputnik 2. The original Sputnik had been the first craft to orbit the earth so once again the use of an animal on board was a logical extension to the Soviet programme.

The significance of this flight is easy to dismiss now but at the time, this was a major coup in the Soviet Unions battle with their American counterparts and throughout the late 1950s they recorded some notable achievements.

It has been well publicised that Soviet scientists used to use stray dogs as part of these experiments because they felt that they would have already built up a durable character. As such, Laika was found wandering the Moscow streets unaware of the fate that awaited her.

She was then subjected to a period of intense training and before the flight, it is reported that one of the scientists involved took her home to be with his children.

“I wanted to do something nice for her: She had so little time left to live, said Doctor Vladimir Yazdovsky.

Subsequently, Laika took flight aboard Sputnik 2 and as planned, she died in orbit.

For those looking to be absolutely technical, the first animals in space were those fruit flies back in 1947 but the image of Laika is the one that sustains and has lived on as a memorial to an incredible period in space travel and in history as a whole.