The cruel reign of Joseph Stalin saw many Soviet people persecuted for a whole host of spurious reasons. If their political of religious beliefs didn’t tally with the regime, deportation was the likely outcome followed by harsh treatment and potentially death at one of Stalin’s infamous labour camps.

Religion has been a contentious topic throughout Russian and Soviet history but what were Stalin’s own beliefs? How did the leader view religion and why did so many citizens suffer at his hands simply for following their own religious course?

Stalin was born in Georgia in 1878 and like many of his contemporaries, attended a church school. At the age of sixteen, the young Stalin took up a place at a Georgian Orthodox Seminary but it seems that this is the point where rebellion against religion took hold.

He left before taking his final exams amidst two very different versions as to why this was the case. The seminary itself recorded that Stalin was forced to leave because he was unable to settle his tuition fees while the official Soviet line is that their future leader was banned for collecting illegal literature and putting a Social Democrat Study Circle in place.

Stalin’s life after the seminary is better documented and shortly after leaving, he began to study Marxism and the teachings of Lenin. In turn he became involved in the Bolshevik revolutions and eventually worked his way up the political ladder within the Communist Party until he became General Secretary in 1932. 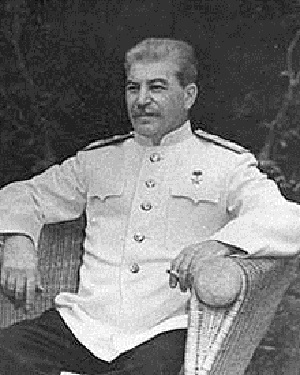 By now, any religious teachings were long behind him and Stalin’s government promoted a belief in atheism.

Atheism is defined as the rejection of belief in an existence of deities and therefore promotes the idea that there is no one God or a collection of Gods. It is occasionally confused with agnosticism whereby the follower has no firm beliefs but keeps the subject open.

The beliefs will have stemmed from Lenin and Marx and the infamous quote that religion was the ‘opiate of the masses’. As a result, atheism was actively promoted under Stalin and a forced programme of teaching was introduced in schools.

By the end of the 1930’s it had become dangerous to practise any form of religion or to openly hold any beliefs. The Russian Orthodox Church began to suffer and was nearly driven to extinction.

Churches were demolished and Stalin’s purges began to account for priests, monks and nuns with over 100,000 being executed between 1937 and 1938.

During World War II, thousands of parishes resurfaced as Stalin’s stance softened with other priorities taking up his time. Like many of his actions however, changes in policy seemed to take place on a ‘whim’ and shortly before his death, he turned his persecution tactics to Islam, Roman Catholics and other minority religious groups within the Soviet Union.

So when anyone asks about the Stalin religion, the answer is that he believed in no God but like many of his beliefs, he took this to the ultimate in extremes.