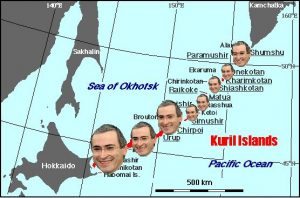 It’s been another bumper week for blog posts about Russia.  So good, in fact, that I had to bring forward my original publication date of Sunday, for fear that there would be more good posts tomorrow and I’d run out of space.

Seriously – this is an epic edition.  You might want to go grab a cup of coffee before you start reading!

Let’s kick off with an in-depth exchange between Vadim Nitkin of Foreign Policy’s Russia Blog and Anatoly Karlin of Sublime Oblivion, who are doing their best to raise the standard of Russia blogging by engaging in honest to goodness in depth debate.  Over the Kuriles and Khodorkovsky no less.

If that’s not enough on the Kuriles, check out Streetwise Professor’s take – like Vadim he’s wondering just what on earth Russia is doing tweaking Japan’s nose like this.

“It wasn’t as if Medvedev just dropped by on his way to the store, or something. The efforts needed to make the visit truly were extraordinary.  The weather over the islands is usually appalling, and bad weather forced Medvedev to abort an earlier trip.  As it was, he had to fly to Sakhalin, change to smaller plane (no airport in the Kuriles being capable of handling his normal aircraft) and risk getting marooned there for an extended period by a bad turn of weather–which almost happened, in the event.  In other words, he had to work very, very hard to deliver this facial to the Japanese.”

On a related theme, Robert Amsterdam diverts himself from the Khodorkovsky trial to talk about this week’s Alexander Lebedev raids:

“It’s the new legal nihilism:  it looks like reform, it smells like modernization, and it’s nothing but good news for all the smiles, handshakes, and champagne from Washington to Paris and Berlin.  Who, at this point, is the one acting like a nihilist?”

Well, that’s it for this week.  I’ll leave you with the news that Birdbrain has a new look.  She’s wearing a variant on the delightfully styled 2010 Weaver theme, also on display here on SL, and over at Sublime Oblivion.  It seems that Anatoly is a becoming bit of a blog style guru…